Ak Bars returns to the top of the Eastern Conference with a win over Torpedo, despite an underpowered performance on home ice.

It took a fine goaltending display from Konstantin Barulin to secure the points for the Kazan team as Torpedo had the better of long periods. After falling behind to Shaun Heshka's first-period piledriver, the visitor went on to outshoot Ak Bars, and if Vadim Krasnoslobodtsev's shot against the piping had found the target it could have transformed the outcome of the entire game.

Instead, though, it was Evgeny Medvedev who doubled Ak Bars' advantage in the second period, and even though Torpedo out-shot its opponent 15-4 in the final session Barulin kept everyone at bay except for Sakari Salminen, securing a 2-1 win. 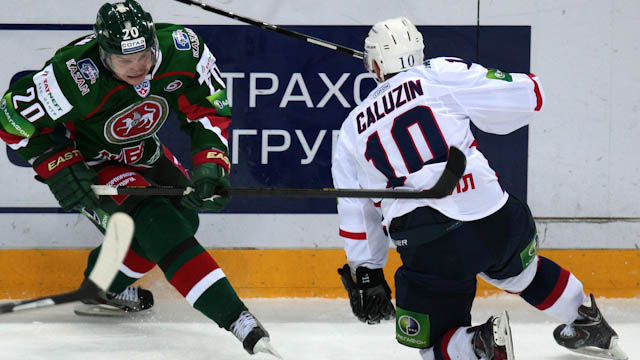 Milan Bartovic had given Slovan a first-period lead, jockeying for position on the slot and deflecting a Libor Hudacek shot past Stanislav Galimov. That advantage lasted barely two minutes, though, before Rafael Batyrshin tied it up with a thunderous shot from the far arc of the left-hand circle.

The most notable moment of the scoreless second period was a late, high check on Slovan's Martin Stajnoch which saw Atlant's Nikita Soshnikov expelled from the game. But there was to be no way of separating the teams before the shoot-out.