The clash of the day saw defending champion Dynamo Moscow take on Eastern Conference leader Ak Bars. As well as the prestige and league points at stake, it was also a big chance to impress Team Russia’s head coach Zinetula Bilyaletdinov, in the arena to watch two of his former clubs go head to head.

The rival goaltenders are of particular interest to coach Bill as he finalizes his Sochi roster. While Konstatin Barulin of Ak Bars is generally seen as the most likely KHL goalie to go to the Olympics, Dynamo’s Alexander Yeryomenko returned to the national set-up for the last stage of Eurotour and after back-to-back MVP awards in the last two play-offs many believe he should get the third goaltending slot.

It was Yeryomenko who had the better evening, claiming a shut-out and the MVP award in his team’s 3-0 win. At the other end, meanwhile, Barulin could do little with the three goals Dynamo scored on him. Konstantin Glazachev’s rising wrist-shot from close range was precisely placed into the corner, while questionable defense allowed Sergei Soin to beat two opponents to a Yury Babenko pass and snaffle a one-timer from close range. Maxim Pestushko completed the scoring with a penalty shot in the third, shooting early as Barulin came out to meet him.

Yeryomenko himself survived a few anxious moments, but even on the penalty kill Dynamo made it hard for Ak Bars to get dangerous shots at his goal. The men from Kazan managed just 24 efforts in total, half of them in the first period, as Dynamo ruthlessly closed out a shut-out for their goalie. 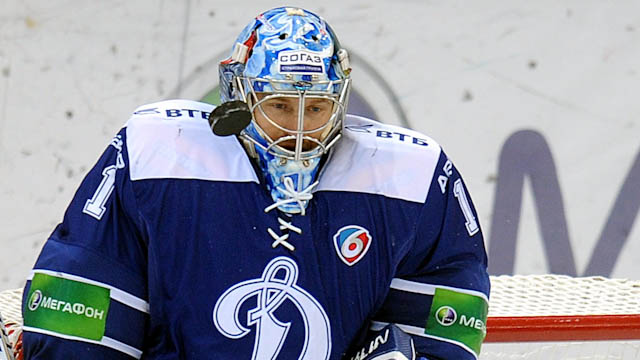 The big comeback
Metallurg Magnitogorsk pulled off a great recovery at home to Ugra, clawing back a 0-4 deficit before winning in overtime. For much of the season Magnitka’s head coach Mike Keenan has been demanding a greater contribution from the rest of his team and urging his players not to rely too heavily on the top line, and tonight it was Denis Platonov who heeded that call. Platonov got the winner two minutes into the extras, having earlier scored the third goal in that fightback.

Not that the first line was entirely muted: Jan Kovar scored two, including the 57th-minute equalizer. Meanwhile, for Ugra a miserable run of form continues. After racing into a 3-0 first period lead thanks to Mikhail Yakubov, Andrei Shefer and Veli-Matti Savinainen it all went wrong for the visitor, which now has just one win in 17 games.

Last-ditch drama in Ufa
Four goals in a breathless last 10 minutes ended with Salavat Yulaev pinching a 3-2 win over Avangard. Antti Pihlstrom got the winner with 64 seconds left to play, but only after the visitor had clawed back a 0-2 deficit with two goals in 20 seconds. Dmitry Semin and Alexander Perezhogin looked to have taken the game into overtime with that blistering double in the 56th minute, which wiped out Dmitry Makarov’s double for Salavat, but when Perezhogin was sin-binned late on his short-handed team-mates paid the ultimate penalty. 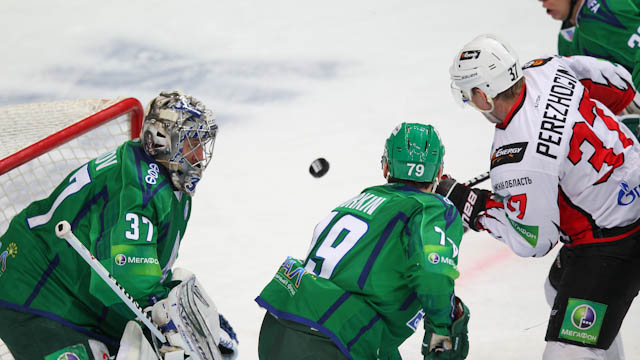 Around the league
Avtomobilist kept up its improved form with a shoot-out win at Traktor. Fyodor Malykhin settled it following a 2-2 tie in regulation.

Torpedo won 3-2 at Vityaz thanks to two goals in a minute early in the third period. Jarkko Immonen and Justin Hodgman (pictured) turned the game in the visitor’s favor. 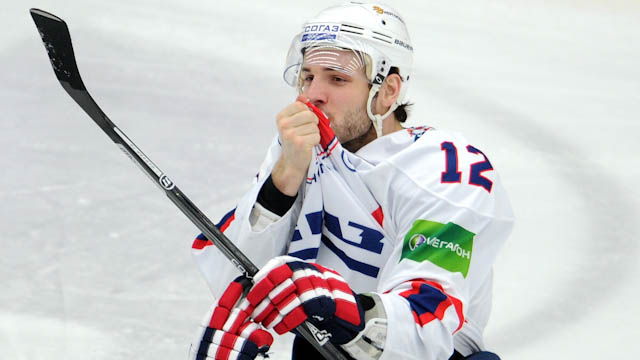 Konstantin Romanov’s first-period goal was enough to give Barys a 1-0 win at Neftekhimik. Ari Ahonen made 33 saves.