For the second time this season Atlant beat CSKA, and this time Igor Radulov got one over on his younger brother. Alexander was injured back in October when Igor found the net in a 4-1 win in Moscow, but on Wednesday, as the sides met once again in Mytishchi, both brothers took the ice and Igor finally broke the deadlock in the 58th minute.

CSKA coach John Torchetti had questioned his team’s defending on the goals it gave up in Monday’s defeat against Lokomotiv and the manner of Radulov’s game-winner will likely cause more concern behind the bench. After a long period of CSKA dominance – including three more unsuccessful powerplays – it was a classic sucker punch. But it was a blow which should perhaps have been avoided: Denis Denisov gave the puck away cheaply behind the goal, and then failed to deal with Yury Trubachyov’s attempt from out on the boards, leaving Radulov with a tap-in.

Konstantin Koltsov added a second into an empty net to seal the win, while at the other end Stanislav Galimov made 29 saves. 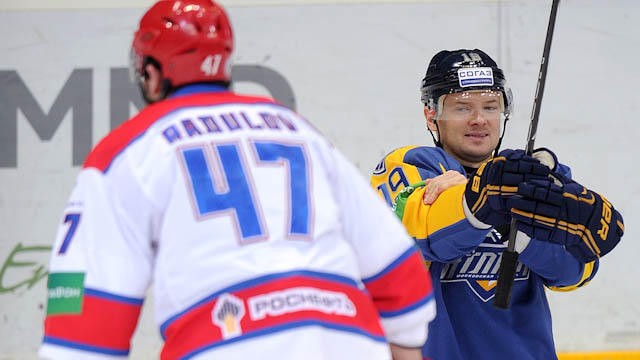 Dekanich gets first shut-out
Medvescak’s Mark Dekanich missed out on his first KHL shut-out by just nine seconds on Monday, but after making 42 saves against Sibir he was not to be denied his goaltending landmark.

The Zagreb team won 2-0 in Novosibirsk, with Mathieu Carle and Ryan Vesce getting the goals to make it two wins from two on Medvescak’s tour to the depths of Siberia. But in a hard-fought game tempers spilled over just after midway when Maxim Ignatovich was expelled from the game for a hard challenge of Jonathan Cheechoo. Cheechoo himself recovered quickly enough to take part in a brawl, leaving the home fans convinced that he had exaggerated the initial foul. 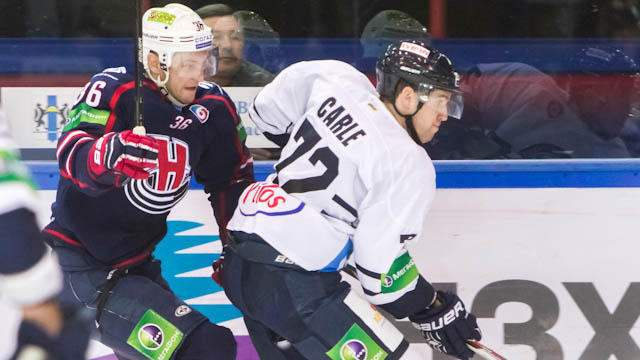 Satan returns to Slovan
Slovan welcomed legendary Slovak international Miroslav Satan back into the team for the visit of SKA – but although the presence of the former NHL man gave a lift to his struggling club it was not enough to inspire a shock win.

Admittedly he was used sparingly on his return to action – having not featured since last fall the 39-year-old found himself on the third line, and got barely 15 minutes of game time in regulation. But his team-mates rallied to stretch high-flying SKA, forcing a 2-2 tie before finally succumbing to Roman Cervenka in a shoot-out. Slovan might even have stolen the win in overtime, but Milan Bartovic was unable to beat Ilya Ezhov with a penalty shoot. That miss proved prophetic, as Ezhov kept his goal intact throughout the shoot-out, finally denying Satan to end the game.

Early Artemy Panarin had given SKA an early lead, but Andrej Stastny quickly leveled and Mario Bliznak put the hosts in front midway through the second. Igor Makarov made it 2-2, but neither side could go on to win in regulation. 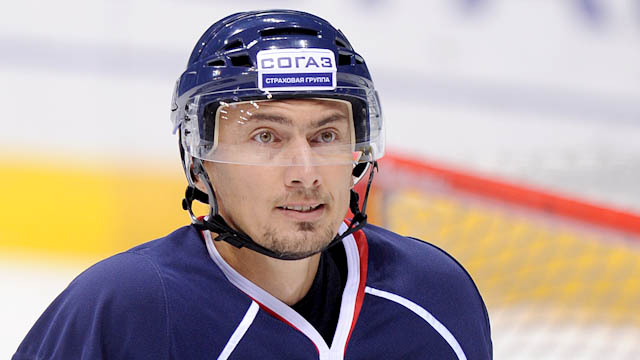 Around the league
Dinamo Riga won 4-1 at home to Lokomotiv, but the scoreline did not entirely reflect a close-fought game. Two goals from Kyle Wilson either side of the second interval proved decisive, cancelling out Emil Galimov’s opener for Loko. The home team added two more in the closing minutes to seal the win. 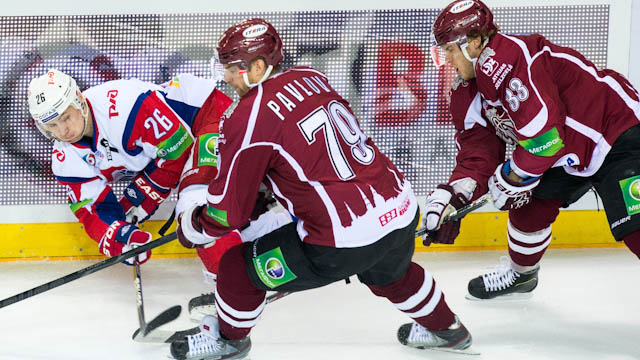 Admiral ended Donbass’ winning streak with a 4-1 win in Vladivostok. Alexei Ugarov scored the the first and last goals of the game, Richard Gynge got the game-winner late in the first period.

Evgeny Orlov was Amur’s hero in a shoot-out win over Spartak. Orlov tied the game at 3-3 in the 59th minute and went on to get the decisive goal in that shoot-out. Earlier Spartak had recovered a 0-2 deficit with a three-goal blitz early in the third, but it wasn’t enough. This game also saw two brothers going head-to-head, with Amur’s Alexander Yunkov opening the scoring while Spartak’s Mikhail got an assist on his team’s third goal.

Metallurg Novokuznetsk made a bright start against Dinamo Minsk, scoring two in the first 10 minutes on the way to a 3-2 win. But it was Rafael Akhmetov’s goal early in the third which proved decisive as the Belarusians battled back in the closing stages.