On Saturday, the 30th of November, it was the turn of Novosibirsk’s aspiring young athletes to benefit from the latest Master Class with the stars, the series of training sessions provided by leading motor oil brand and official KHL partner, Castrol Magnatec. On this occasion, youngsters from the city’s hockey schools were joined on the ice by four pros from HC Sibir’s main roster - goaltender Sergei Gaiduchenko, defenseman Maxim Ignatovich, and attackers Nikita Tochitsky and Dmitry Monya – plus a quartet from the Snipers, Sibir’s YHL team - goalie Nikolai Pavlov, defensemen Roman Rachinsky and Timur Migranov, and forward Vladislav Maslikhin. 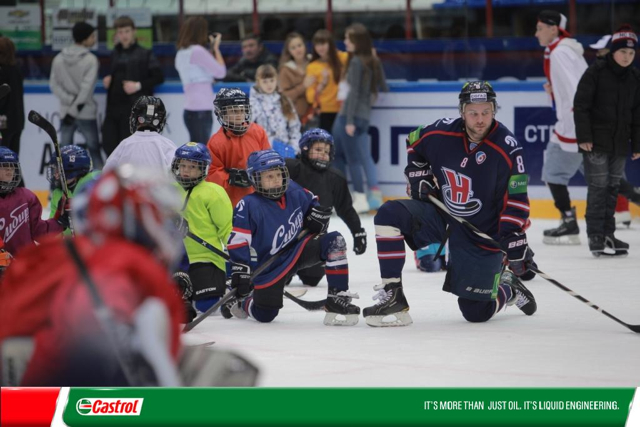 The players put the young hopefuls through a tough and thorough training session in which they shared and demonstrated not only the most important technical skills, but also the secrets of many of the game’s subtleties. The juniors hungrily imbibed all they were taught by the experienced pros and tried with all their might to put it into practice.

“A single hour doesn’t give you much time to impart all the skills needed in a professional player’s arsenal, but I’m sure the pleasure these kids took from today means just as much as the experience they acquired, and I’d like to thank Castrol Magnatec for making this happen,” said Maxim Ignatovich after the Master Class. “I hope today’s joint endeavors will inspire these guys to work really hard and reach new levels of sporting excellence.”

In addition to coaching from the stars, Team Castrol hosted a quiz competition with the prize of a trip to Bratislava’s Slovnaft Arena to attend the 2014 KHL All-Star Game on January 11. It was won by Dmitry Orlov, and he will join the Khabarovsk winner, Maria Revyakina, on a memorable journey to Slovakia as part of Castrol’s team of winners. 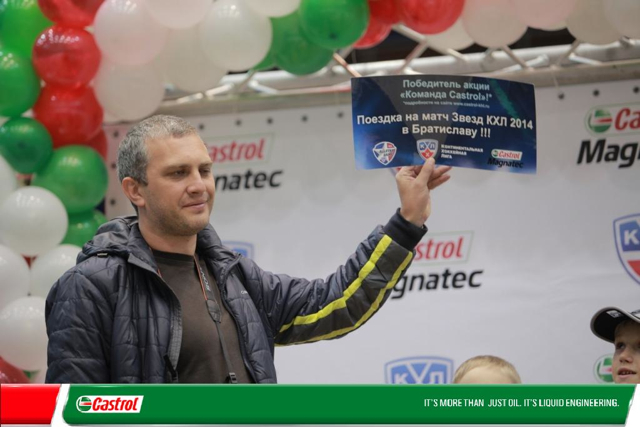 The event finished on a high note with everyone who attended, player or spectator, given souvenirs of the occasion from Castrol Magnatec and were treated to an autograph and photo session with Sibir’s hockey stars.

The Castrol-BP Master Classes have become a popular, established tradition for many hockey fans, and over the past few years have reached many towns and cities across Russia and abroad: Novosibirsk, Saint Petersburg, Chelyabinsk, Nizhny Novgorod, Yaroslavl, Minsk, Khabarovsk, Kazan and Krasnoyarsk. The list of players to have shared the tricks of the trade with students of sporting schools across the nation includes stars such as Alexei Yashin, Vladimir Tarasenko, Darius Kasparaitis, Andrei Nikolishin and many more.

About Castrol
Castrol is widely recognized as a world leader at developing the latest generation of lubricants. The company is renowned globally in the production of motor oil and other lubricants for light and heavy vehicles transporting goods across land, sea, or air. A key strategy in Castrol’s continued progress has been the formation of partnerships with leading car manufacturers, including Jaguar Cars Ltd, Land Rover, Volvo Car Corporation and Ford Motor Company; Castrol has also joined up with Volkswagen Group to develop motor oil for Audi and Volkswagen engines and was the first company to sign a global agreement with BMW. The company produces many of today’s most popular motor oils, including Castrol EDGE and Castrol Magnatec.

About BP
BP is one of the biggest oil and gas companies in the world, and each day supplies fuel to customers in more than 80 countries across six continents. BP is also heavily involved in geological exploration and production of hydrocarbons, refining and distribution, and has successfully developed a new Alternative Energy division to implement various projects concerning energy from wind, hydrogen and gas. ВР is also one the main foreign investors in Russia, where since 1990 the company has been active in trading projects, motor oil, and of course, the mining, processing and supply of oil and gas. BP is a 19.75% stakeholder in Rosneft, the current world leader by volume of production.