Two goals in the space of one minute in the second period put Lokomotiv on track for a 3-1 victory at in-form CSKA. The Army Men had returned to Moscow after a run of four successive road wins, but found themselves forced to retreat almost immediately when Vadim Khlopotov fired Loko ahead off an Igor Musatov pass on 1:36, reprising the combination which had opened the scoring in Loko’s previous game at Severstal. 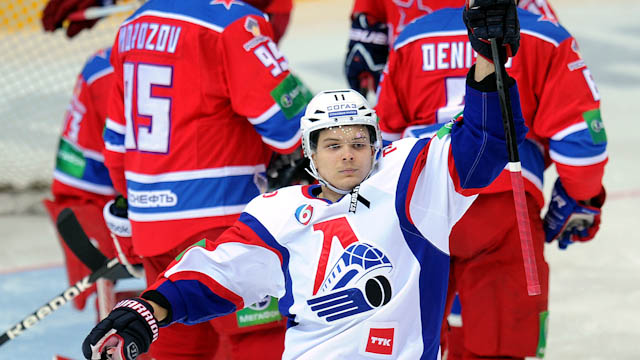 That was the only scoring in a first period where chances were hard to come by. CSKA’s problems on the powerplay continued as Loko’s penalty kill enabled them to see out Musatov’s elbowing call largely in center ice. In turn, the visitor failed to muster a meaningful shot on goal during its sole numerical advantage.

But the game sprang into life as the halfway mark approached. First Sergei Konkov let rip with a vicious one-timer which surprised Ilya Proskuryakov and found the net via the inside of the post. Within a minute it was 3-0, thanks to a goal which the netminder will be desperate to forget. Vitaly Zotov’s dump and chase seemed harmless enough until the goalie lost track of the puck and let it slip back out in front where Mikelis Redlihs had a simple tap in.

If CSKA’s fans were beginning to doubt that it was going to be their night, the video referee only underlined that suspicion on the half-hour. Rising star Nikolai Prokhorkin thought he’d poked the puck under Curtis Sanford’s pad after his initial shot was blocked; the screens told otherwise and the deficit stayed at three. 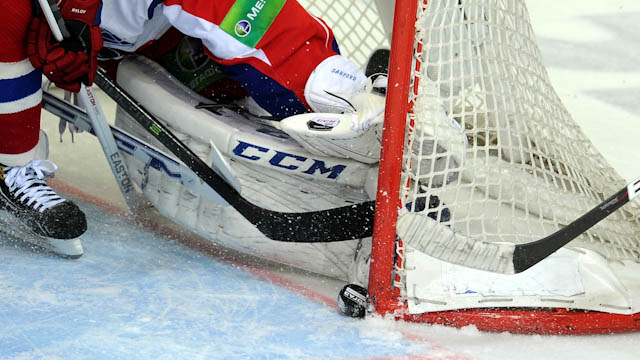 Sanford’s resistance was finally broken in the 46th minute when Stanislav Yegorshev got beyond the red line and picked out Alexei Morozov on the slot to reduce the arrears. But Loko hasn’t conceded more than one regulation time goal in the past month, and survived the remainder of the game with little cause for alarm.

Pestushko back on the scoresheet
Maxim Pestushko got his first goal since returning from injury and helped Dynamo Moscow to a 3-1 road win at Torpedo. After a scoreless first stanza, Dynamo took the initiative in the second session. Dominik Granak opened the scoring in the 23rd minute before Pestushko rediscovered his potent partnership with Leo Komarov to get the second of the night.

Torpedo did get one back in the third through Vladimir Denisov, but Sergei Soin ensured there would be no dramatic recovery when he scored in the 58th minute. His joy was cut short though when he was handed a 5+20 for a high check.

SKA stretched in Prague
Table-topping SKA traveled to in-form Lev for a game which lived up to expectations. The two teams traded six goals in regulation before a shoot-out handed the points to the visitor thanks to Ilya Kovalchuk’s goal.

Lev might have been the outsider here, but even after conceding an early goal to Artemy Panarin the Czech team refused to buckle. Justin Azevedo tied it up early in the second before Michal Birner’s penalty shot put Lev ahead in the 27th minute. Then right before the second hooter Michal Repik reinstated that lead, only for Viktor Tikhonov to make it 3-3 at the start of the third.

New coach, no luck for Admiral
Admiral, which surprisingly parted company with head coach Hannu Jortikka on the eve of Monday’s game, suffered a 2-1 defeat at home to Spartak. Andrei Sergeyev, with a shot from the blue line, surprised everyone except Matt Anderson who was quick enough to deflect the puck and open the scoring for the visitor, but Felix Schutz tied it up in the first period when he fired home the rebound from Niclas Bergfors’ long-range effort.

In the second session Mikhail Yunkov put Spartak back in front, and Schutz saw a goal disallowed after he flicked the puck into the net with his hand as the Moscow team avenged its earlier defeat to the newcomer from Vladivostok. 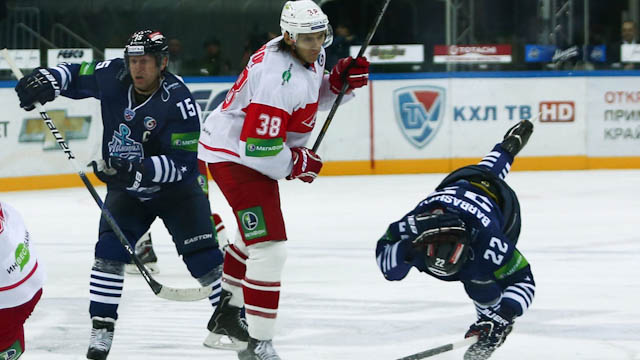 Around the league
Donbass made it five wins in a row with a 4-0 success at Amur. Lukas Kaspar and Vaclav Nedorost did the damage late in the first period, while Mike Leighton made 29 saves.

Metallurg Novokuznetsk’s young goalie Ilya Sorokin picked up his second ‘rookie of the week’ award prior to Monday’s game, but had an evening to forget against Medvescak. The Zagreb team romped to a 5-1 win in Siberia, Michael Ryan leading the way with two goals.

Sibir blitzed Dinamo Minsk with three goals in the first four minutes on the way to a 3-1 home win. Goalie Lars Haugen’s game lasted just 107 seconds before he was benched after conceding to Nikolai Lemtyugov and Maxim Krivonozhkin.

Slovan left it late to beat Severstal when the teams met in Bratislava. Milan Bartovic got the winner on 58:05 after Michal Sersen had tied it up at 2-2 in the 53rd minute.