Ugra was seconds away from saving a tie in its home game with CSKA, only for Denis Denisov to snatch a last minute winner for the Moscow team.

Denisov had earlier helped set up a 2-0 lead for CSKA, getting the assist as Ilari Filppula opened the scoring early in the second, but Ugra leveled the scores midway through the third.

The final minutes were breathless: CSKA inched ahead once more through Igor Grigorenko, but Radek Smolenak seemed to have taken the game to overtime when he tied it up at 3-3 on 58:52. But Denisov turned joy to despair for the hosts with just 27 seconds left on the clock. 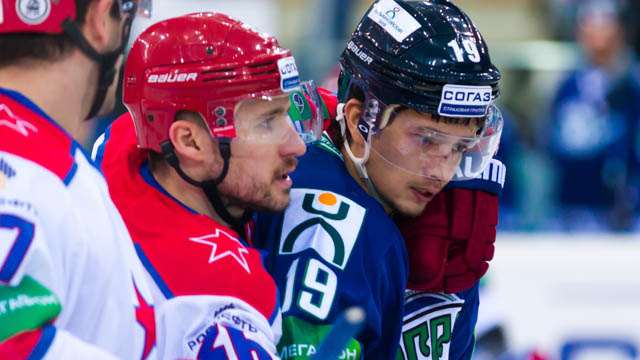 Second shock win for Novokuznetsk
Metallurg Novokuznetsk has been in difficulties for most of the season – but when it comes to playing the top clubs it seems the Siberians know exactly what to do. Thursday’s shoot-out win away to Ak Bars came hard on the heels of a sensational success at Dynamo Moscow as the Eastern Conference strugglers proved once again that they have no respect for big reputations.

The teams tied 4-4 in regulation, with Metallurg stunning its host with a three-goal blitz in 10 minutes of the second period. Vladislav Kartayev, Ansel Galimov and Alexander Aksyonenko turned a 1-2 deficit into a 4-2 lead.

It wasn’t quite enough to win it in regulation: Tim Stapleton’s second of the night tied it up in the third, but the shoot-out went Metallurg’s way thanks to Kurtis McLean.

Lev’s month to remember
November has been a successful month for Lev, with the Prague club winning seven out of eight games to climb to fifth in the Western Conference.

The successful sequence continued in Astana with a 3-2 success over Barys. The game was always close, but Lev never allowed Barys to get in front. Jiri Sekac eventually got the game-winner in the 48th minute, just seconds after Roman Starchenko had tied things up for the second time on the night.

Earlier Sekac claimed the assist on Martin Thornberg’s opener, with Jakub Matai also finding the net for the visitor.

Six of the best for Medvescak
Matt Murley led the scoring with 2+1 as Medvescak routed Sibir 6-1 on home ice in Zagreb. The contest was effectively over after just 12 minutes, with goals from Charles Linglet, Kurtis Foster and Mike Glumac putting the home team in control.

Sibir’s Dmitry Kugryshev pulled one back with a penalty shot before Murley got to work in the second and third periods as the Croatian team recorded a resounding win.

Around the league
Avtomobilist won 3-1 at home to Dinamo Riga with two unanswered second-period goals making the difference. Alexander Streltsov and Alexei Yefimov put Avto in charge after the teams had traded goals in the opener.

Three goals in the last 10 minutes took Dinamo Minsk to a 4-2 comeback win over Traktor. Alexander Kitarov’s go-ahead goal on 56:12 was backed up by Evgeny Nogachyov in the last minute as the Belarusians made it three wins in a row.

There was third-period excitement in Moscow as well as Spartak and Salavat Yulaev traded five goals in the final session. The visitor got the verdict, though, with Igor Mirnov shooting Salavat to a 3-2 win with 74 seconds left to play.

Fyodor Belyakov scored in the last minute to force a 1-1 tie for Neftekhimik at Donbass, but the home team went on to the win the shoot-out thanks to Maxim Yakutseniya.

Two goals early in the second period saw Torpedo come from behind to beat Admiral. Wojtek Wolski got the winner.

Avangard powered to a 4-0 lead inside the first two periods against Slovan and held on for a 4-2 win. Alexander Popov and Anton Kuryanov led the scoring, each getting 1+1.