Maxim Pestushko made his first appearance for Dynamo Moscow since suffering a serious injury on Oct. 1, and Alexander Ryazantsev made his blue-and-white debut after finally shaking off his injury problems – but the defending champion was stunned by a 3-4 home defeat against lowly Metallurg Novokuznetsk.

Having recovered from 0-3 to win in Siberia less than two weeks ago, Dynamo seemed to be on course for a less stressful evening when Alexei Sopin made it 1-0 in the seventh minute. But Sergei Yemelin and Alexei Kosourov turned the game around before the first interval, and Metallurg never trailed from then on.

The second period saw Denis Kokarev tie it up, only for Mikhail Kuklev to reinstate the lead within three minutes, and a powerplay goal for Ansel Galimov stretched that advantage early in the third. Ryazantsev marked his debut with a consolation goal in the 58th minute, off a Pestushko assist, but the points were lost. 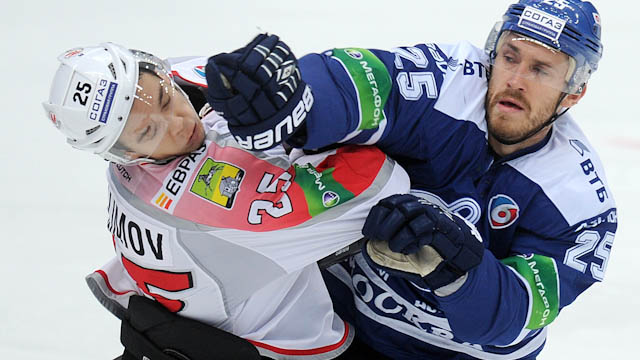 Two goals on the counter-attack in the third period turned the game around for Amur after Ak Bars grabbed the lead on the powerplay late in the second when Alexei Tereshchenko put home the rebound from an Ilya Nikulin shot. But the video referee ruled that Artyom Kryukov’s shot went in off the post – a decision which prompted derision from the home crowd after a long look at the replays – and Timofei Shishkanov got the winner after an error saw Ak Bars turn over possession in the central zone.

Kuznetsov’s winning return
Evgeny Kuznetsov returned to the Traktor roster after a two-game break and promptly delivered a goal and an assist to help his team beat Spartak 5-3.

His big contributions came in the closing minutes of the second period, creating the chance for Jan Bulis to tie the game at 2-2 before putting Traktor in front on 39:19.

Traktor also had cause to thank Anton Glinkin, who finished with 1+3 in a game where Spartak had the better of the early stages before the visitor finally won through. 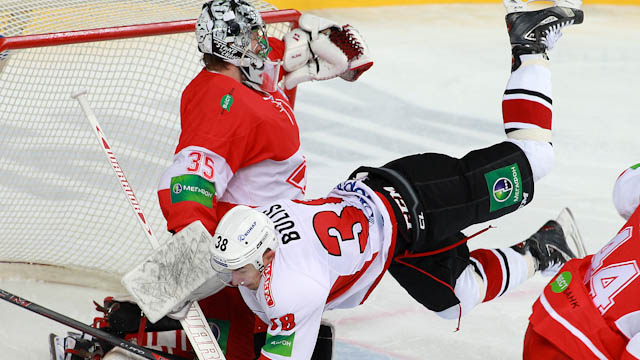 Around the league
Donbass withstood a fightback from Metallurg Magnitogorsk and snatched a 3-2 win. Teemu Laine got the winner with 10 minutes to play after Magnitka had recovered a 0-2 deficit.

Andrei Vasilevsky pulled off a game-winning performance between the piping for Salavat Yulaev, making 37 saves to shut out Medvescak in Zagreb. Dmitry Makarov’s first period goal was enough to separate the two teams.

Paul Szczechura’s overtime goal gave Dinamo Riga the win after a 1-1 tie at Ugra. Kyle Wilson put the Latvians ahead before Veli-Matti Savinainen equalized in the first period. 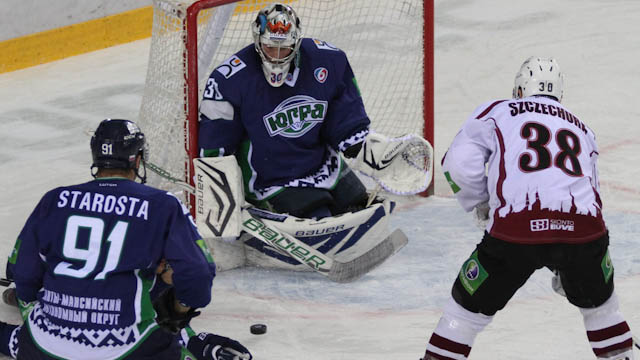 Dinamo Minsk made it two wins in a row, but it took a late goal to sink Neftekhimik. Alexander Materukhin settled the outcome on 58:17, breaking a 3-3 tie to snatch the points for the Belarusians.

Denis Parshin scored twice to cancel out Kristian Kudroc’s opener and lead Torpedo towards a 3-1 win over Sibir. Kudroc saw his early effort undone after he was expelled from the game for boarding midway through the second period.

Avangard clawed back a 0-2 deficit at home to Lev, but ultimately lost out to David Ullstrom in a shoot-out. Patrick Zackrisson and Topi Jaakola put Lev in front in the first, but Denis Kulyash and Anton Kuryanov leveled it up.

Slovan suffered a second heavy defeat in three days, going down 6-1 at Barys. The Kazakh team had two goals from Nigel Dawes to wrap up the win after Konstantin Rudenko and Dmitry Upper overhauled Michal Miklik’s early opener for Slovan.

After scoring eight last time out, Avtomobilist could not manage a single goal at home to CSKA, and lost out 2-0. Igor Grigorenko and Alexei Morozov found the net for the Army Men; Ilya Prosuryakov made 28 saves.

First-period goals from Viktor Drugov and Alexei Ugarov set Admiral on the way to a 3-1 win at Vityaz. 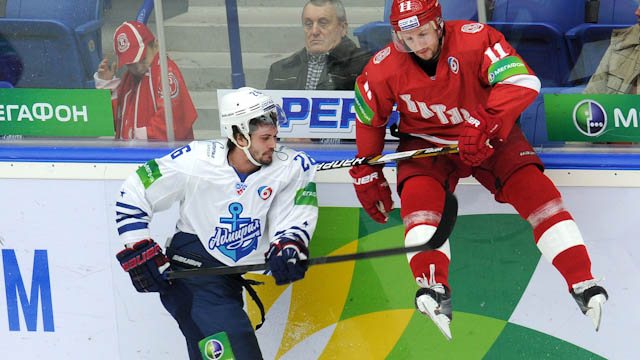