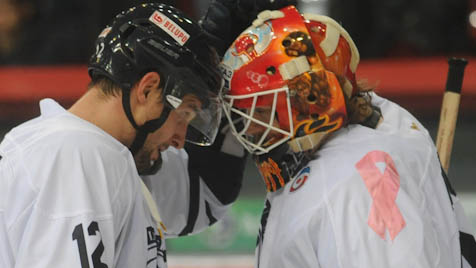 For Barry Brust the choice of idols was an easy one. Growing up in British Columbia and making his first career steps as a goaltender, Barry was told stories of a hockey legend by his dad. Johnny Bower, a Ukrainian-Canadian star of the 1960s Toronto Maple Leafs and a Hall of Famer, a fearless and maskless wonder of the Original Six era, was an easy guy to idolize. After all, his entire story is that of perseverance and belief in yourself. Bower, as it happens, didn’t break into the NHL until he was 34 years old, having first built a star status in farm teams.

Well, as it happens, his dad’s stories are not the only thing that connects Brust to Bower. And neither is being a 30-something goalie who hasn’t gotten much of a chance to break into the NHL (Brust’s only stint in the world’s top league dates back seven years ago, to all of 11 games for the Los Angeles Kings). His connection to the legend is a bit more tangible.

Exactly one year ago, while playing for the AHL’s Abbottsford Heat, Brust logged in 268 minutes and 17 seconds without allowing a single goal, a shutout streak almost four and a half games long, which broke the league’s record. The previous record holder? Bower, who set it 55 years before.

“After the season was over, the team actually had Johnny Bower to send in a video for me”, says Brust. “This is something that I will cherish for the rest of my life.”

Alas, after the season was over, Brust had once again found himself having played another year in the minors with no openings into the big league in sight. With one season in Europe (with Germany’s Straubing Tigers) already behind him, Brust’s thoughts turned overseas. But now, it was the KHL where the 30-year-old goaltender decided to take his talents. And not just the KHL, but its newest, and most exotic franchise, Medvescak Zagreb.

“After playing in Germany, (the KHL) was something I wanted to pursue”, says Brust. “With so many North American guys there, including the coach and the general manager, I though the transition into the Russian league would be a little easier.” 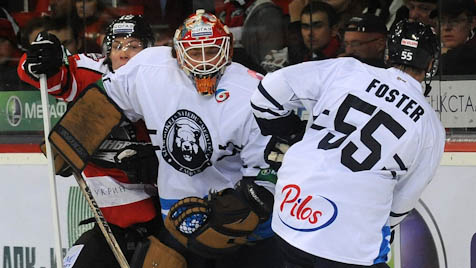 No wonder! On a team where almost the entire roster boasts Canadian or American roots and English is the language of choice for everyday use, adjusting to the KHL must really be a piece of cake. For Brust, the ability to go everywhere with his teammates, to speak English on road trips and to enjoy a team culture as close to home as possible are all huge factors. Right down to the cuisine.

“We go to different restaurants when in town, but the pregame meal is chicken and pasta”, says Brust, mentioning the all-too-common culinary tradition of Canadian and American hockey players.

That is not to say that playing in Croatia, in one of Europe’s most beautiful cities, is lost on Brust. One would have to be blind and deaf to ignore Zagreb’s historic attractions and its now-famous hockey fans.

“(Zagreb) has swept me off my feet”, says Brust. “I didn’t really know too much about it before I got here, but turns out it’s a destination spot. It’s been amazing and the weather has been great. I have nothing to complain about here!”

And while Brust admits that neither he, nor any hockey player, really, can be called a “celebrity” in football- and basketball-mad Croatia, the fan following Medvescak has is truly unique. What about those famous fans, by the way?

“They are nuts! They are awesome!” exclaims Brust. “They are so loud! The one thing that really impresses me is, no matter if you are winning or losing, playing well or not, their volume level doesn’t change. They are just very, very supportive and that makes you want to play so much harder for them.”

Well, it’s not like Brust doesn’t reciprocate. Some of his post-game celebrations are definitely YouTube-worthy. To say nothing of his acrobatic saves, one of which the KHL ranked as the best of the month.

“I try not to be robotic in there”, says Brust. “Making athletic saves is a part of my game. I don’t like being predictable. Maybe it’s a drawback of mine, but I think it’s also a strength.” 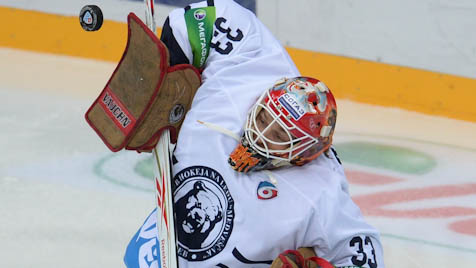 Not being robotic or predictable is something that Medvescak as a team can claim as well. The Bears stormed out of the gate this season, making their KHL debut with a 7-1 shellacking of CSKA Moscow before the delirious home fans. They have since gone one to defeat SKA Saint Petersburg and put up a record good enough to be in the midst of the playoff race. If their road record was as good as when playing in front of those awesomely nuts Zagreb fans, the Bears could’ve been one of the powers of the Western Conference.

But, home-ice advantage is huge in the KHL, as Brust readily admits. It’s a problem Medvescak players are approaching with all the North American diligence and work ethic they have. Still, those Canadian stereotypes may not be all true when it comes to the Bears.

“One thing people probably don’t realize about us, is that we aren’t really a very physical team”, says Brust. “A lot of the guys in the lineup are skill players who, back (in the AHL) were on the first and second lines. Sometimes, other teams want to be a bit more physical against us, just because we are North Americans. But it’s somewhat of a misconception about who we are.”

At least there are no misconceptions about the heir of Johnny Bower. Having posted three consecutive shutouts earlier this season, Brust has shown he can be as reliable a goalie in the KHL as he has been in the minors and in Germany. And while Russia doesn’t have its own Bower holding a record, it’s not out of the question that this Canadian export may make some KHL history before he is done.