After 10 consecutive defeats, Ugra finally tasted victory with an overtime success at CSKA. Marek Troncinsky was the hero for the Khanty-Mansiysk team, scoring the decider to add to his first period goal.

Early on, though, it seemed set to be Alexander Radulov’s day. The forward put up three assists in the opening session, as Alexander Frolov opened his CSKA account and Igor Grigorenko and Alexei Morozov also found the target.

However, Ugra showed great resilience in a narrow loss in Riga last time out, and stayed in touch with the Army Men during that first session. A scoreless second period saw the visitor wrest the momentum away from the Moscow team, and 65 seconds into the last Radek Smolenak tied it up at 3-3. That led to overtime, where Troncinsky’s goal gave Oleg Davydov his first victory as acting head coach. It was also CSKA’s first defeat after the 60-minute mark, and Ugra’s first extra time win. 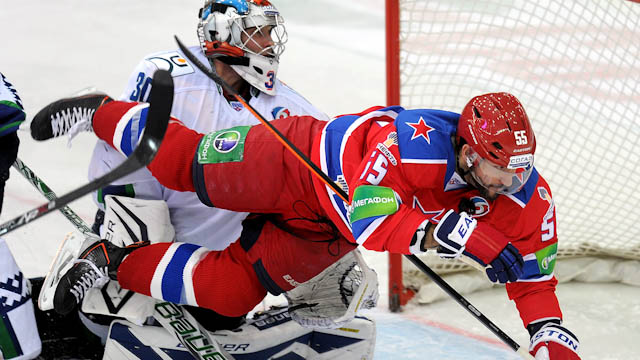 Ak Bars on top
Ak Bars moved to the top of the KHL table thanks to a 2-0 win at Metallurg Novokuznetsk. The Kazan team is now on 60 points, one better than SKA. Emil Garipov starred with 40 saves to claim his third shut-out in 10 games this season, while Dmitry Obukhov and Alexander Burmistrov found the target at the other end.
Karpov’s hat-trick heroics
Maxim Karpov was the key man for Dynamo Moscow, firing home a hat-trick as the defending champion won 4-1 at Amur. The youngster opened his second treble of the season with a powerplay goal in the first period, and added two more in the final session to put the outcome beyond doubt. Alexei Tsvetkov rounded out the scoring as Dynamo made it three wins from four on its Eastern excursion; Dmitry Tarasov’s goal for Amur offered fleeting hope for the home side.
Traktor’s finishing makes the difference
According to most of the stats, Traktor’s game at home to Medvescak was a close affair – but the lop-sided 5-1 final score was testament to some quality finishing from the Chelyabinsk team.

Both sides had 29 shots on goal, but after Semyon Kokuyov beat Barry Brust with a penalty shot on nine minutes, it was the home team which proved more clinical. True, Ryan Vesce tied it up in the 13th minute, but parity lasted just 35 seconds before Jan Bulis put Traktor back in front. In the latter stages Andrei Kostitsyn and two for Petri Kontiola completed the scoring.

Seven-up for Riga
Dinamo Riga made it seven wins in a row to stay hard on the shoulder of the Western Conference leaders. The Latvians took control of the game against Avtomobilist with goals from Vitalijs Pavlovs and Kyle Wilson in the first period. Avto’s Alexei Simakov pulled one back early in the third but Marcel Hascak rounded off a 3-1 win for the home team.
Around the league
Jiri Sekac scored a last-minute goal to force overtime as Lev hosted Barys. He struck with 52 seconds left to tie the game at 2-2 – but Barys still skated to the win thanks to Talgat Zhailauov’s second goal of the night, just 25 seconds from the end of overtime.

Metallurg Magnitogorsk withstood a late fight back to beat Spartak 3-2. The home side took control with three unanswered goals in the second, but Viktor Antipin ended up with the game-winner after Deron Quint and Rastislav Spirko reduced the deficit in the final 10 minutes.

Slovan came from a goal down to win 3-1 at home to Avangard. Milan Bartovic and Peter Olvecky scored late in the second period to turn the game around.

Jonas Enlund scored twice to help Sibir to a 3-1 win over Torpedo. The Swede also got an assist on Dmitry Kugryshev’s equalizer after Denis Parshin had given Torpedo an early lead. 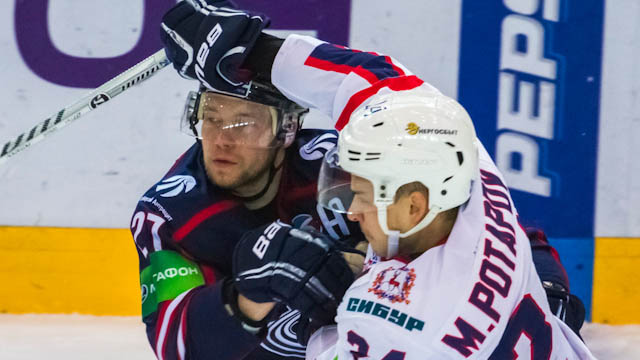 Donbass laid siege to Neftekhimik’s goal, but could not find a way past Matt Dalton. The goalie made 43 saves in his team’s 2-0 win; Martin Cibak and Roman Lyuduchin got the goals.

Salavat Yulaev had a confidence-boosting 5-2 win over Dinamo Minsk, ending a five-game losing streak. The Belarusians, rooted to the foot of the Western Conference, twice led but folded after a three-goal burst in two final-period minutes. Denis Khlystov claimed the game-winner.