Dynamo Moscow was pushed all the way on its first ever visit to Admiral – but after trailing three times on the night, the defending champion snuck away with the points thanks to Alexei Sopin’s goal in the 58th minute. He got the final touch on a blue-liner from Denis Barantsev to complete a recovery which had been building throughout the final period.

Earlier Konstantin Kasyanchuk had tied the game at 3-3, forcing the puck home after a flurry of shots had seen the home defense stretched to limits, but previously Admiral had posed plenty of questions for its illustrious visitor. Goals from Sergei Barbashev and Niclas Bergfors sandwiched Konstantin Sokolov’s successful penalty shot as the Pacific team got in front on three separate occasions.

Barulin blanks Sibir
Ak Bars goalie Konstantin Barulin was in unbeatable form in Novosibirsk, making 48 saves for a shut-out against Sibir. After conceding nine times in the previous two games, the 2-0 win was a welcome improvement for the Kazan team, but at times it took a goaltending masterclass to deny the home side.

At the other end Janne Pesonen took advantage of a relatively rare offensive opportunity to open the scoring in the 36th minute. Evgeny Bodrov wrapped up the win with an empty-netter.

Mozyakin tops the scoring chart
For the second game in a row Sergei Mozyakin scored twice – and he now leads the KHL’s individual point-scoring table with 40 (18+22) from 26 games. That pushes him ahead of team mate Danis Zaripov while another Metallurg Magnitogorsk player, Jan Kovar, delivered 1+2 in today’s 4-0 win over Medvescak and is in third place on the scoring charts.

It was also a good day for the league’s highest-scoring defenseman: Chris Lee strengthened his grip on top spot after opening the scoring in Sunday’s game and going on to add an assist on Mozyakin’s second.

Klepis downs Avangard
When a team is struggling, it often feels like nothing can go right. And Avangard might well be feeling that way after a shoot-out defeat at Lev. The Omsk team has misfired throughout this season, but when Alexander Perezhogin gave it a 2-1 lead in the 52nd minute of a hard-fought game in Prague it must have seemed that a much-needed win was on the way at last.

That hope lasted just 20 seconds, however, before Jakub Klepis – the man whose goal beat Avangard in Game 7 of the Gagarin Cup final two seasons ago – tied it up at 2-2. In the shoot-out Klepis struck again to secure victory for the Czechs and continue the Siberians’ unhappy season.

Around the league
Avtomobilist paid the ultimate penalty when Sergei Demagin was sin-binned late in the game at CSKA. The visitor had just tied the game at 1-1 through Artyom Chernov’s powerplay goal, but within five seconds Demagin was penalized – and Nikita Zaitsev went on to grab a last-minute winner for the Army Men on the powerplay. 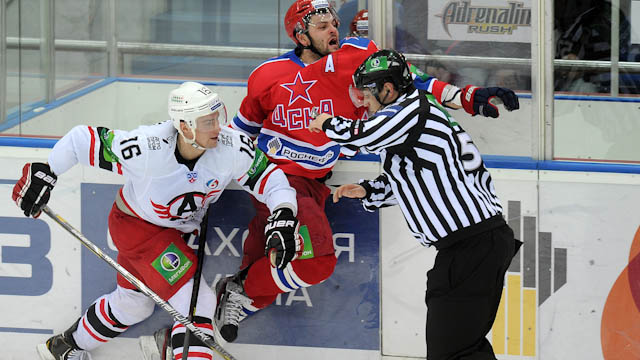 Barys was back to its swashbuckling best, firing six of the best past struggling Slovan to decisively snap a two-game losing streak with a 6-2 win. Roman Starchenko led the scoring with two goals.

Dinamo Riga made it six wins from six, and Ugra suffered a tenth defeat in a row – but things were far from easy for the Latvians. It took a Miks Indrasis winner in overtime to break a 3-3 tie. Indrasis also opened the scoring.

Dinamo Minsk finally got on the scoresheet after failing to find the target in its last two games, but still went down to a 2-5 loss at Neftekhimik. Roman Lyuduchin scored twice for the victors.

Jakub Petruzalek scored twice to help Amur to a 4-2 win over Vityaz. After seven games without success, the Khabarovsk team has now won two on the spin, scoring 10 times in the process.

Maxim Yakutsenya got a shoot-out winner for Donbass following a 2-2 tie at Salavat Yulaev. All the scoring came in 10 first-period minutes; Salavat clawed back a 0-2 deficit in just 24 seconds but could not escape a fifth successive defeat.

Struggling Metallurg Novokuznetsk took an early lead at home to Torpedo – but that was as good as it got for the Siberian team. The visitor hit back strongly to cruise to a 4-1 win; Daniil Zharkov got the game-winner in the second period.

Two goals for Petri Kontiola helped Traktor edge a 3-2 verdict over Spartak. The Finn struck twice in four second-period minutes, but it was Stanislav Chistov who got the game winner early in the third. 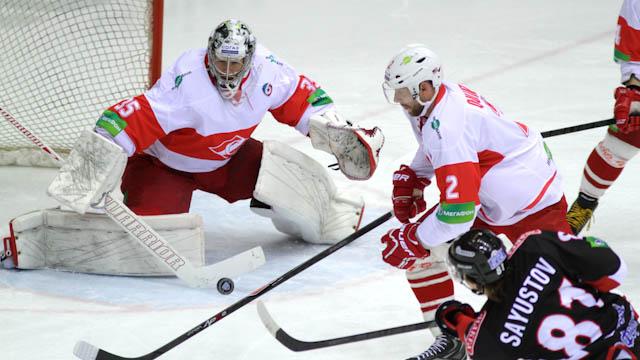