CSKA goalie Ilya Proskuryakov, enjoying a run in the team following an injury to Rastislav Stana, produced a fine performance to blunt one of the league’s strongest offensive trios as the Army Men beat Barys 3-0.

For two scoreless periods it was a duel between the two goalies: Proskuryakov did well to keep out the dangerous Dawes-Boyd-Bochenski troika, while Ari Ahonen pulled off some particularly impressive saves in the second period to ensure CSKA’s misfiring powerplay continued to draw blanks.

But in the third session a quick goal for Alexander Radulov set the tone, and Ruslan Zainullin and Igor Grigorenko went on to complete the scoring. Proskuryakov finished with 36 saves. 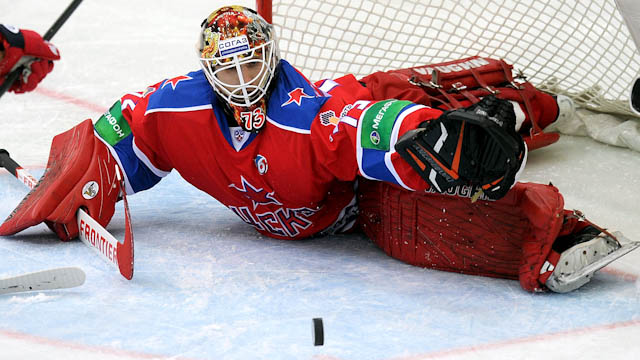 Admiral burns bright
The Olympic Flame arrived in Vladivostok as part of its epic journey around Russia on the way to Sochi – and Admiral took the opportunity to scorch Torpedo with a thumping 5-0 win.

After a scoreless opening session the home side took control. Two goals in barely a minute from Vladimir Pervushin and ex-Torpedo man Alexei Ugarov doused the visitors’ flames. Joakim Lundstrom finished with 29 saves. 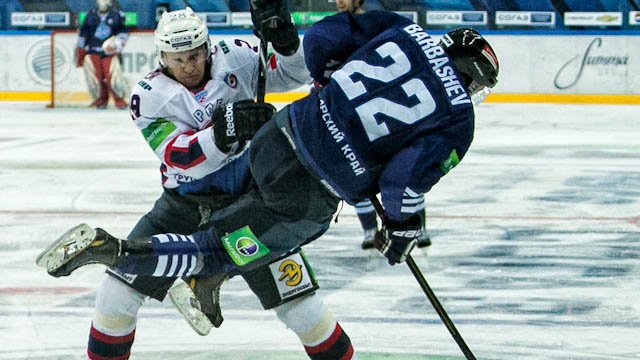 Amur shocks Ak Bars
The Far East doesn’t seem to agree with Ak Bars after the Eastern Conference leader went down to a surprising 6-3 defeat at Amur.

Two days after losing in Vladivostok, the Kazan team snatched an early lead through Alexander Svitov – but it soon started to go wrong. Amur scored three times before the first interval, and never let that advantage go, belying the seven-game losing streak that had dogged it coming into the game. Two goals in 30 seconds in the third period saw Jakub Petruzalek and Dmitry Lugin put the game beyond doubt, and Jan Mursak wrapped it up when he scored his second of the game into an empty net.

Dynamo draws on defense
Dynamo Moscow’s defensemen are usually hailed for their uncompromising handling of opposing forwards, but today in Novokuznetsk it was their goal-getting skills which caught the eye. A shock seemed to be on the cards when struggling Metallurg opened up a 3-0 lead by the 32 minute mark, but two goals from Dmitry Vishnevsky and a 56th-minute equalizer from Dominik Granak tied the game at 3-3. In overtime Martins Karsums put away the winner on the powerplay.
Around the league
Salavat Yulaev fought back bravely, but could not escape a second home defeat in succession after giving a 3-0 lead against Medvescak. Jonathan Cheechoo, Hugh Jessiman and Mathieu Carle put the Zagreb team in control, but when Antti Pihlstrom made it 2-3 with five minutes to play the visitor faced a tense finale. 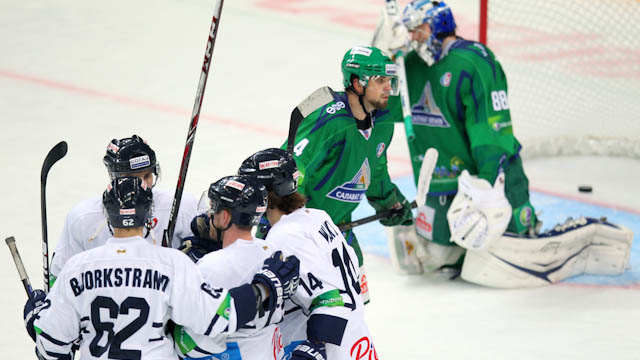 Sergei Mozyakin scored twice as Metallurg reversed a 0-1 deficit to beat Donbass in Magnitogorsk. He got both his goals in the final period.

There was more misery for Dinamo Minsk as the Belarusian team fired blanks for the second game running. This time Traktor’s Michael Garnett gained the shut-out, and his team eased to a 3-0 win thanks to a goal in each period.

Sergei Shirokov got his first goal for Avangard, but couldn’t save his team from another 3-1 road defeat. Marcel Hossa got the game-winner for Dinamo Riga, two days after he settled an epic shoot-out in the Latvians’ favor.

Two assists from Jori Lehtera in the second period helped Sibir to a 3-1 win over Vityaz. Dmitry Kugryshev’s goal on 20:21 eventually proved to be the winner.

Ugra paid the penalty twice as Lev came from behind to win 2-1 in Prague. First Jiri Sekac scored on a delayed penalty just before midway, then he got the assist on Nathan Oystrick’s late winner as Veli-Matti Savinainen sat out a double minor for high sticks.