To say that Metallurg Magnitogorsk’s Canadian newcomer Chris Lee has come out of nowhere to dominate the KHL would not actually be an exaggeration. As of right now, the 33-year-old native of Georgian Bay, Ontario is steadily in front of the league’s defensive scoring race with 21 points in 24 games, being the only KHL defensive regular to even approach point-per-game status. That’s the domination part taken care of. 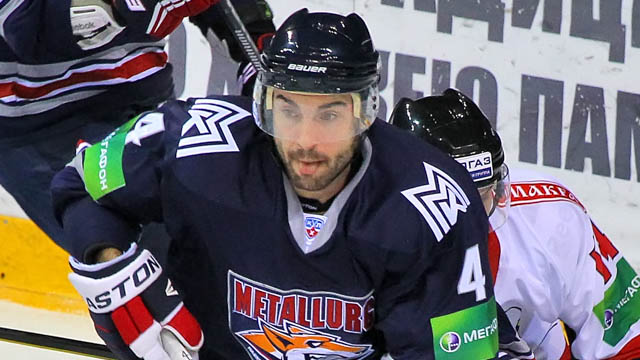 As for the “out of nowhere” part? Well, Lee has never played in the NHL, in fact was never even drafted. OK, fine, that happens, but surely he was a long-time respected AHLer, right? Nope. Didn’t break into the second-tier league until he was 26, having spent two and a half seasons in the ECHL, with the Florida Everblades. Well, that’s certainly isn’t unheard of either, even for graduates of Canadian major junior hockey. Well, see, there is another thing – Lee never played major junior. Never progressed beyond the Ontario Provincial Junior A Hockey League, toiling for teams such as the Couchiching Tigers and the Parry Sound Shamrocks before ageing out at 20 and taking off across the border to play American college hockey.

Ah, then. American college hockey? They’ve certainly provided a bunch of talented NHL prospects before. Which Division I school snatched him up, you say? None of them, actually. Lee spent his early twenties at SUNY-Potsdam, a Division III college known for its excellent mathematics program and exactly zero professional hockey stars. One wonders why, having received such a great education in math, Lee couldn’t figure out that at the age of 24 and still not in pro hockey, chances are he should look at another line of work.

But giving up was never part of the equation for Lee. Considering himself lucky to garner attention from ECHL, and willing to change positions from an undersized winger to an undersized blueliner, he went on working on achieving his dream. That being of playing in the NHL, of course. A dream that would’ve surely come true had it been Hollywood, but in real life things tend to get more complicated. In real life, Lee came close. Frustratingly, tantalizingly close.

“I was having a pretty good season with the (AHL’s Wilkes-Barre/Scranton Penguins)”, Lee reminisces. “Turning 30 at the time, I gave it a good shot to finally make it. And I was called up by Pittsburgh – once. Took part in the warm-up and was pulled aside afterwards and said I wasn’t dressing… And that was it for the NHL. Made a couple of flights with the team, got to see Malkin, Crosby and Gonchar up close and got sent back down… Honestly, at that point, it looked like it wasn’t going to happen for me in the NHL.”

So, Chris and his wife decided to face reality and evaluate their options. It was about that time the KHL came calling but, never even having been to Europe, the Lees perhaps wisely decided not to get their crash course in overseas living in Russia. It was two seasons in Germany and one more in Sweden instead, where the Canadian import quickly proved his bona fides as a terrific offensive defenseman tailor-made for the big ice. Following a 45-point season with the Mannheim Eagles and a 41-point one with Farjestads BK, Lee had no problem landing that “now you know you’ve made it in Europe” deal with the KHL earlier this year.

“I am an undersized defenseman, not a big physical guy”, Lee says. “In North American hockey, with the ice being so small, it can be very tough. But on the big ice, there is so much more room. And skating being the biggest part of my game, it gives me much more freedom. You have to be smarter on the big ice, too, but I think have adapted pretty well. It has been a great fit for me, I think.”

Magnitogorsk, an ultimate Russian industrial blue-collar town, may not have been such an easy fit, however, but Lee is nothing if not adaptable.

“It’s definitely different”, he said. “Most of the people here are working class, factory workers and everything they’ve got comes hard for them. You kind of feel the responsibility to work hard, because they are spending their hard-earned money to come watch you. We’ve had a tour of the factory and it’s amazing. I can’t believe how hard they work at that place, and as a person you should respect that.” 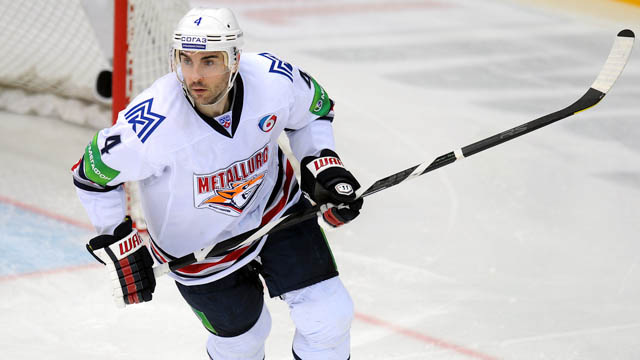 Places like this make for good hockey crowds, something that Lee has come to appreciate. There are a lot of things about Russia that he appreciates, actually. And a lot more things which he doesn’t mind. The travel? No problem, the European trip was fantastic. The pre-Olympic media craze? Oh, that stuff only happens in Moscow. The on-ice dirt sometimes thrown the North Americans’ way? Actually, it’s kind of fun and just goes to show how much other teams want to beat Metallurg. The food? All Canadians complain about the food!

“The food is fine”, says Lee, dismissing the problem offhand. “Actually, there is one thing. It’s the way you guys drive. What is going on? There are two lanes but the traffic is five-cars wide! People drive in and out as they please. This has definitely been the biggest difference. Luckily, we got set up with a driver so I don’t have to get behind the wheel. I don’t think I want to, anyway.”

Russia’s peculiarities aside, Lee’s transformation from Division III anonimity into one of the best blueliners in the world’s second-best league is nothing short of remarkable and is yet another testament of the perhaps a little hackneyed North American ideals of hard work, perseverance and positive thinking. Also, playing on a team coached by the legendary Mike Keenan may have had something to do with how easily Lee has slipped into the new environment.

“It’s been easier, just based on the language factor”, Lee says. “It’s new for him too, since he never coached on the big ice. And he has done a fantastic job adapting to this. His biggest thing, though, is we need to be a team. We work together and win together. Doesn’t matter if you play 20 minutes a game or three, he wants maximum effort from everybody. And he’s done a good job instilling that.”

That Keenan may have done, but with folks like Lee, who has had to work and struggle for everything he got, it is pretty apparent that not much instilling was needed after all.