Out on the Pacific coast, league newcomer Admiral Vladivostok is preparing for a testing week of home games. On Wednesday, as the KHL returns to action after the international break, Eastern Conference leader Ak Bars sails into town, then on Sunday it’s defending champion Dynamo Moscow which comes to the Fetisov Arena. 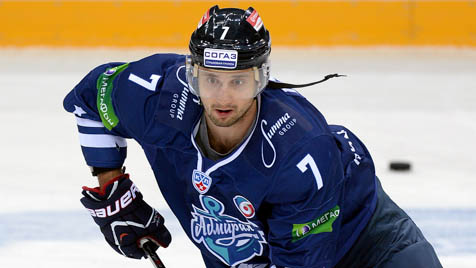 But Admiral’s hastily assembled crew is enjoying a voyage of discovery this season – and despite having to build up a club from scratch, Vladivostok has seen its team produce some impressive performances so far as it seeks to navigate safe passage into the play-offs in its debut year. Currently eighth in the conference, Hannu Jortikka’s team has perhaps exceeded expectations thus far – and forward Enver Lisin (left) has already reaped the rewards of the orient after his early season form earned him his first appearances for Russia’s national team at the Karjala Cup over the weekend.

Jortikka, already renowned in the Far East for leading nearby Amur Khabarovsk to its only KHL play-off to date, is by nature cautious. The Finn understands better than most that with less than half the regular season completed it’s too early to celebrate a successful start for Admiral. Speaking after the team’s recent win at Spartak, he was keen to emphasize that his team is still developing, despite its rapid progress in the first two months of the season.

“Up to now I’m happy. We are a new team, and every point we can get – especially points on the road – is very important for my players,” he said.

“It’s been an unusual situation for us. It’s not just a new set of players or a new coaching staff – when the whole club is new and you start out with nothing at all, maybe that’s quite a difficult thing. We only had two days in Vladivostok before the start of the season.” 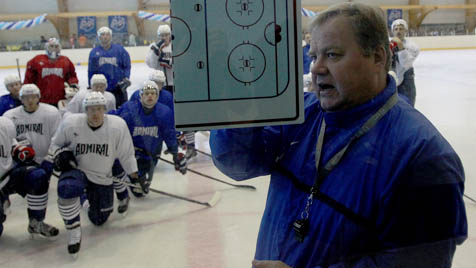 While the club benefitted from certain concessions – most notably a specially organized draft of players from other KHL organizations – there was still a need to get everyone to buy into the Admiral project.

Happily for Jortikka (right), that draft has enabled him to assemble a squad of highly-motivated hockey players. “They want to show what they can do,” he said. “Maybe a few of them have a point to prove [after being allowed to leave their previous clubs].”

One man who has certainly made his point in Admiral colors is Lisin. The 27-year-old forward arrived from Metallurg Magnitogorsk with a reputation as a middling second-liner. In Vladivostok he has blossomed, averaging 20 minutes of game time for the first season in his career and reveling in the responsibility of leading the offense and captaining his team. A return of 16 points from 23 games was enough to get him a Karjala Cup call-up.

While in Finland he scored twice and had an assist in the 5-2 win over Sweden, a return which helped him pick up the award for the best forward at the competition. But he also picked up an injury and is waiting on a medical verdict before facing Ak Bars. That didn’t stop him rushing back to training in Vladivostok, though, telling Admiral’s unofficial website that he was eager to get back to a team which has become ‘like family’ to him in the past three or four months. 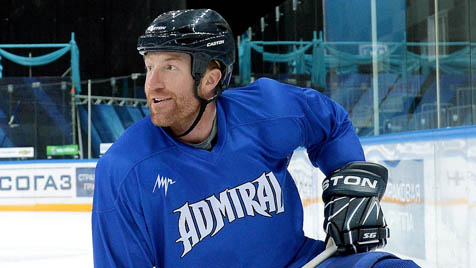 Another name to watch out for is defenseman Mike Commodore (left), a recent signing. The NHL stalwart has a Stanley Cup win on his resume (Hurricanes, 2006) and has fond memories of Russia after helping Team Canada to World Championship gold in Moscow in 2007. Now he’s fitting his distinctive red mop into an Admiral helmet after making his debut on Nov. 1, getting his first point in a shoot-out win at Dinamo Minsk.

Meanwhile, if the club’s latest arrival is finding it difficult to settle in the Far East, he can always turn to Jortikka for advice. The Finn is fast turning the remote region into his second home, following that earlier stint with Amur, and he remains philosophical about the challenges of expanding the KHL’s Eastern frontier.

“It’s almost the same wherever you are based,” he said. “During the season there is only hockey, there’s no private life. There’s a bit more flying, but you quickly get used to that and learn to sleep a bit on the planes. So it’s not so hard for me.”