Ak Bars proved far too strong from CSKA, powering to a 4-1 win in Kazan in the final game before the international break.

The decisive action came either side of the first interval. Alexei Tereshchenko opened the scoring 53 seconds before the siren, and Artyom Lukoyanov doubled the lead in the 24th minute. Tereshchenko got his second goal early in the final session, and Alexander Burmistrov found the target barely a minute later. Nikolai Prokhorkin pulled one goal back for CSKA. 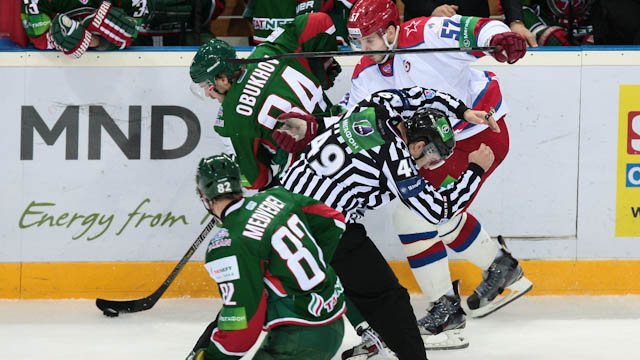 Avtomobilist motors on
Avtomobilist beat Avangard for the second time this season, boosting its play-off push with a well-drilled performance in Omsk. Sergei Demagin got both goals for his team, finding the net in the third and 34th minutes. That took his tally to three goals in five games following his transfer from Neftekhimik and helped the team stretch its winning streak to seven games.

Avangard pulled a goal back in the final period but could not claim any points from the game.