The clash of two Army clubs began with the Olympic Flame arriving at SKA’s arena in St. Petersburg – and ended with CSKA’s injury-hit side placed firmly in the shadows. SKA proved too strong from the start, racing into a 4-0 lead inside 25 minutes thanks to goals from Ilya Kovalchuk, Viktor Tikhonov, Vadim Shipachyov and Alexei Ponikarovsky.

Nikolai Prokhorkin led CSKA’s attempt at a fightback, grabbing two assists as Maxim Goncharov and Alexei Morozov scored consolation goals, but a 5-2 scoreline ensured that the victory banner was hoisted by the hosts. 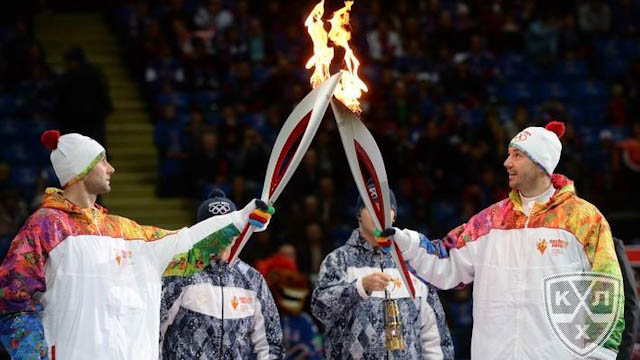 Traktor trounces Barys
Traktor is showing signs of putting its early-season troubles behind it after following up Saturday’s win at Avangard with a resounding 5-1 success over high-flying Barys. Evgeny Kuznetsov, Saturday’s game-winner, was a key player once again scoring twice in two minutes late in the second period. His shorthanded solo effort on 38:57 opened up a 3-0 lead for Traktor, and there was no way back for big-scoring Barys.

The Kazakh side has hit a wobble after its blistering start to the campaign. Tonight’s loss was its second in succession, and once it again its powerful offense was restricted to just a single goal.

Avangard still struggling
If Traktor’s travails are easing, there is no such good fortune for Avangard. The Eastern Conference’s crisis club continues to lurch from defeat to defeat and Monday saw the Omsk team lose a 2-0 lead before crashing 2-5 at home to Metallurg Magnitogorsk. Maxim Kazakov was the star of the first period, scoring twice for the hosts, but after that it was the Sergei Mozyakin show. He struck a hat-trick, with Evgeny Timkin and Danis Zaripov completing the scoring on another miserable outing for Avangard.

Around the league
Igor Mirnov scored twice, and Antti Pihlstrom returned 1+2 as Salavat Yulaev clinched a 5-4 win at Ugra. The home side recovered a 1-3 deficit with a strong second-period show, but couldn’t convert it into a win.

Konstantin Koltsov scored late on to earn Atlant a 1-1 tie at home to Dinamo Riga – but the Latvians took the win on a shoot-out to stay third in the West. AleksandrsNizivijs got the winner; Marcel Hossa had put Dinamo in front in the 42nd minute. 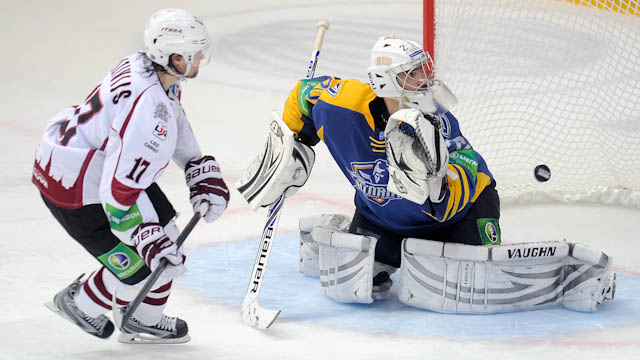 Donbass climbed to fourth in the West thanks to a 2-1 home win over Admiral. All the goals came in the middle session, with Peter Podhradsky and Clay Wilson doing the honors for the home team.

Two goals from Martins Karsums took Dynamo Moscow to a 2-1 comeback win over Torpedo. All three goals on the night came on the powerplay, with Wojtek Wolski giving Torpedo a first-minute lead before Karsums stepped up to continue the form which saw him named as one of the players of the week.

Matt Murley found the way past Alexei Murygin to see Medvescak to a home win over Amur. The Zagreb team dominated throughout but found Amur’s goalie in great form. Eventually, though, Murley scored on him twice to lift his team to a 2-1 success.

A lightning start from Lokomotiv set up a 2-1 home win over Slovan. Daniil Apalkov opened the scoring after 19 seconds, and Ilya Gorokhov made it 2-0 in the third minute. Michal Miklik reduced the arrears in the final session.

Two goals from Jonas Enlund made the difference as Sibir won 4-2 at Dinamo Minsk. The Belarusians battled back from 0-3, but Enlund’s empty-netter ensured there would be no dramatic finish.

Severstal came from behind to beat Lev 2-1 in Cherepovets. Vadim Berdnikov got the winner with 10 minutes to play.

A late flourish earned Spartak a 5-4 win in a topsy-turvy game at home to Metallurg Novokuznetsk. Mikhail Yunkov tied it up at 4-4 on 55:48 before Denis Bodrov got the winner on 56:11. Earlier Spartak opened up a 2-0 lead, but Metallurg also led twice.

Vasily Streltsov was the game-winner as Avtomobilist edged Neftekhimik by the odd goal in five.