The top guns of the Eastern Conference both picked up wins on Monday to maintain their grip on the top of the table. Barys was first in action, winning 3-1 at Admiral despite absorbing long spells of pressure from the home team. Two goals from skipper Dmitry Upper sandwiched Mikhail Panshin’s game-winner in Vladivostok.

Following that, Ak Bars went to the top of the KHL table with a 2-0 success at home to Spartak. It took some time to subdue the visitor, and goalie Emil Garipov pulled off 30 saves for the shut-out. Kirill Petrov opened the scoring late in the second, and Tim Stapleton put the result beyond doubt in the 47th minute. 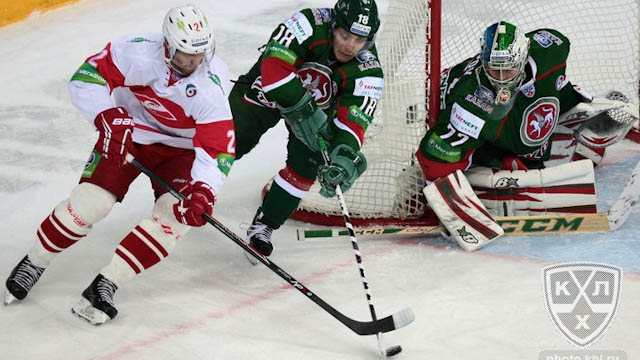 Donbass downs Dynamo
Dynamo Moscow followed up its perfect finish against Medvescak with a perfect start against Donbass – but it soon went wrong for the defending champion. Martins Karsums put the home team ahead after just 54 seconds, but it was Donbass which emerged victorious by a 2-1 margin. Lukas Kaspar and Petteri Wirtanen got the goals for the Ukrainians, while Dynamo’s powerplay faltered one again. Most alarmingly for the Blue-and-Whites, they struggled to test Donbass in two powerplays in the last 10 minutes. The visitor effectively killed those penalties to see out the victory. 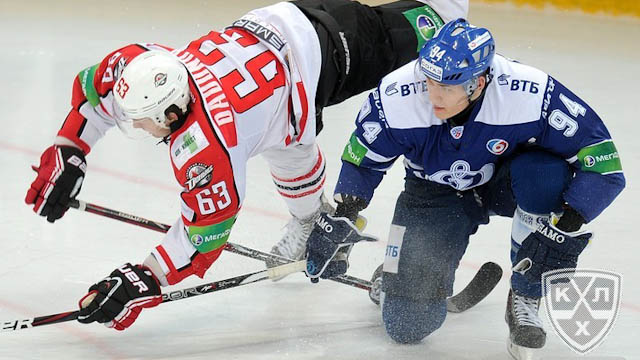 Five-star Avangard
There hasn’t been much to cheer for fans in Omsk this season, but troubled Avangard produced some of its best hockey to smash Amur’s resistance early on. Sergei Kostitsyn was the architect of much that was good about a blistering start: he scored on 1:38 and had an assist as Kirill Lyamin made it 3-0 in the eighth minute. Two further goals in the 22nd minute – the first of them from Kostitsyn from Alexander Frolov’s third assist of the night – made it 5-0. Shell-shocked Amur finally stemmed the tide, pulling back two goals through Andrei Stepanov and Timofei Shishkanov.

Around the league
Medvescak’s unlucky road trip continued with a 0-1 defeat at Vityaz. The Zagreb team, beaten in the last minute at Dynamo on Saturday, saw Ivan Lisutin block 32 shots while Barry Brust was beaten by Ivan Ivanov in the first period.

Ilari Filppula scored the winner in the 55th minute as CSKA edged Slovan 3-2. The Moscow team had trailed to an early Juraj Mikus goal until the third period but rallied well to claim the win.

A third-period fight-back earned Sibir a point at home to Avtomobilist, but the visitor prevailed in the shoot-out after a 3-3 tie. Anthony Stewart decided the outcome, having earlier given his team a 3-1 lead in the second period.

There was another shoot-out in Prague, after Lev and Dinamo Riga tied at 1-1. Jakub Klepis got the decider for the Czechs.

Metallurg Novokuznetsk made it two wins in a row thanks to a late goal from Nikita Vyglazov. That was enough for a 2-1 win over Ugra.