Two shorthanded goals helped Ak Bars to a 5-3 win over Medvescak. The hosts opened up a 2-0 lead thanks to a pair of goals from Mikhail Varnakov in the first period, but the action really hotted up around the midway mark.

First Ak Bars defenseman Grigory Panin picked up a full house of penalties – minor, major and expulsion – on 30:07, not long after Charles Linglet had reduced the deficit for Medvescak. But then, while the visitors had the numerical advantage, Ak Bars scored twice: Dmitry Obukhov (left of picture) and Kirill Petrov (right of picture) found the net to take the game out of reach.

Medvescak battled hard, and two goals in 30 seconds early in the third set up a tense finale. But in the end Alexei Tereshchenko found the empty net late on to secure the win that keeps Ak Bars on top in the Eastern Conference. 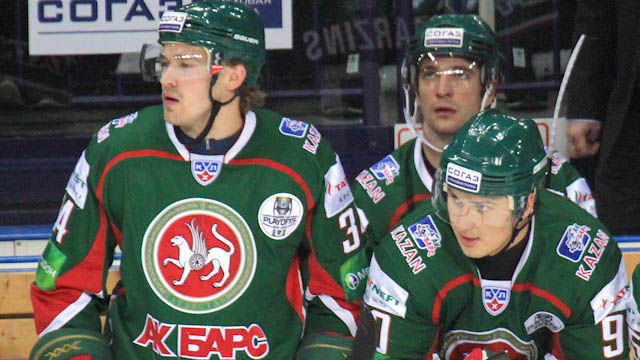 Barys leaves it late in Novokuznetsk
Eastern Conference high-flier Barys won 5-3 at Metallurg Novokuznetsk – but it took two goals in the last three minutes to settle the outcome. Nigel Dawes and Konstantin Rudenko took the game beyond a spirited home team in those final moments, but struggling Metallurg twice led. However Damir Zhafyarov’s goal for 3-2 was cancelled out just 13 seconds later when Brandon Bochenski got his second of the game for Barys, and the offense which has fired the Kazakhs to second in the Conference went on to claim another victim.

Comeback win for Riga
Dinamo Riga trailed 0-2 and 1-3 in Bratislava, but Mat Robinson ultimately gave the Latvians a 4-3 win to maintain their grip on third place. The Canadian defenseman scored twice on the night, with Marcel Hossa and Kyle Wilson both contributing 1+1 as Dinamo recovered from a slow start.

Earlier Tomas Netik and Michel Miklik had given Slovan the initiative, but in the latter stages the game fell away from the Slovak team.

Around the league
Second period goals from Nikolai Lemtyugov and Vyacheslav Belov saw Sibir come from behind to win 2-1 at home to Avangard. Matthieu Garon’s second game in goal for the Omsk team saw Avangard looking stronger on defense but the Canadian goalie has yet to score a KHL win. 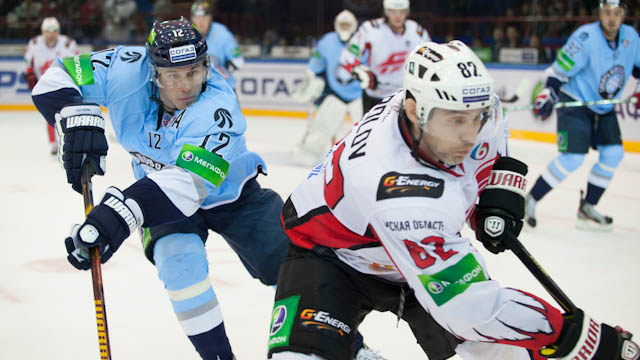 Avtomobilist got into gear in the closing minutes of its game at Amur to claim a 5-3 victory. The teams were tied 2-2 before Alexander Yunkov put Amur ahead early in the third. But Evgeny Fyodorov leveled the scores in the 50th minute, and 76 seconds later Vladislav Yegin put Avto ahead. Eduard Lewandowski sealed the win in the last minute.

Tim Brent scored the only goal of the game as Torpedo beat Donbass. He struck on the powerplay in the 52nd minute of a hard-fought clash in Nizhny Novgorod.

Dmitry Shitikov was the hero for Vityaz, scoring his team’s shoot-out winner against Dinamo Minsk after earlier cancelling out Alexander Materukhin’s opener. 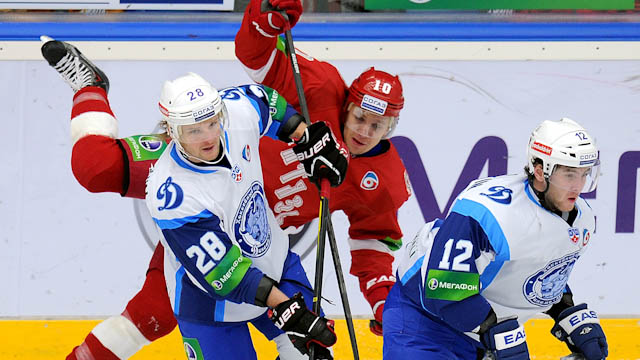 Two goals from Jonas Andersson, including a 52nd-minute game-winner, saw Ugra to a 3-2 win at Admiral. 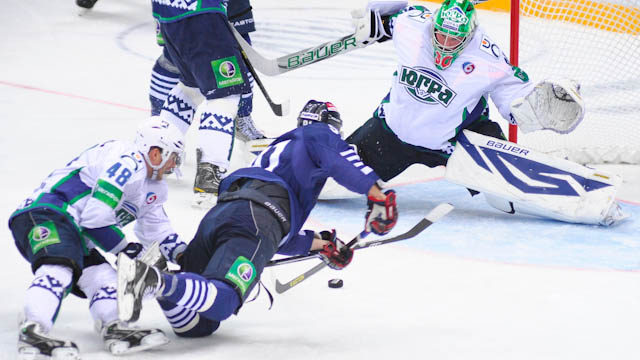