The Avangard revival took a blow at home to Eastern Conference leader Ak Bars – but even in defeat there were positives for the Omsk team. The hosts slipped to 0-2 early on, prompting fears of another long evening for that oft-criticized defense. But two goals from Dmitry Semin, both assisted by Alexander Frolov, tied it up early in the second. In the final session Avangard had the better of the play, but 10 saves from Emil Garipov ensured Ak Bars forced overtime. And in the extras debutant goalie Mathieu Garon, late of Tampa Bay Lightning, was beaten once more as Janne Pesonen gave the visitor a narrow win. 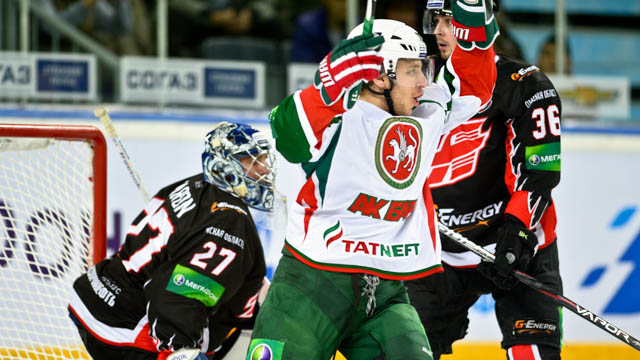 Dynamo takes top spot
A 4-1 win at Ugra saw Dynamo Moscow climb to the top of the KHL table, two points clear of SKA. The game was decided by two goals either side of midway, cancelling out Andrei Shefer’s opportunistic opener for the home team late in the first. Yury Babenko tied it up on 27:57, and Alexei Sopin profited from an error by Nikita Gusev to put Dynamo ahead in the 32nd minute.

The defending champion showed strong defense early in the third, and as Ugra tired Konstantin Glazachev and Leo Komarov completed the scoring.

Around the league
After four seasons without a goal, Barys defenseman Artemy Lakiza made it two in three games as the Kazakhs beat Torpedo 4-2. This time it was the game-winner as well, coming early in the final period. Barys closes to one point of Ak Bars, having played two games less.

In the clash of the strugglers, Avtomobilist edged Vityaz in shoot-out following a 1-1 tie. Anthony Stewart got the decider.