League newcomer Admiral sailed into the home of Russia’s Baltic Fleet – and promptly sank SKA with a 3-1 win. The Vladivostok team began strongly, with wave after wave of attacks pinning SKA into its own zone for the first minute until Evgeny Grachyov scored on Alexander Salak after 68 seconds.

The home side prepared to launch a fusillade of its own, forcing Admiral to weigh anchor in its zone for long periods. But when the fleet was able to launch a sortie it did so with devastating effect: Ilya Kovalchuk gave away a penalty shot in a desperate attempt to stop Enver Lisin, and although that chance was wasted, Artyom Ternavsky soon doubled Admiral’s advantage in the 12th minute.

Viktor Tikhonov’s powerplay goal late in the first gave SKA hope, but Lisin found the target just before halfway to reinstate a two-goal cushion which allowed Admiral to weather the on-going storm and claim a famous victory. Meanwhile, after losing a shoot-out in Zagreb last month, SKA will grateful for a break from playing the league’s new teams. 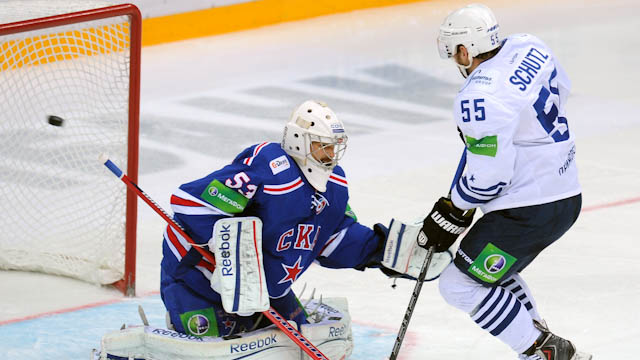 Fedorov sits out as CSKA wins
While CSKA fans wait hopefully for the return of Sergei Fedorov to the ice, John Torchetti’s injury-hit roster continues to pick up points without him. A 2-1 home win over Neftekhimik was settled by second-period goals from Oleg Saprykin – his second in three days – and Sergei Shirokov. Yegor Milovzorov pulled one back as Neftekhimik pressed hard in the final session, but it wasn’t enough for the visitor. 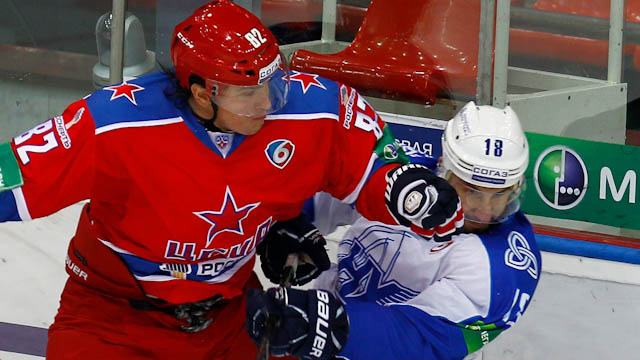 Slovan late show
Less than a minute remained as Tomas Netik struck the winner for Slovan in an 11-goal thriller at home to Traktor. It might have been a day for defenses to forget, but it was certainly an occasion for fans to remember as the Slovaks edged a 6-5 verdict in a thrilling encounter.

Traktor, though, will wonder how it failed to win after leading 3-0 inside 18 minutes and 4-1 before halfway. Slovan clawed back that deficit, only for Alexander Guskov to put Traktor ahead yet again on 48 minutes. But Michal Vondrka tied it up once more before Netik’s late heroics put the home side ahead for the first – and decisive – time.

Around the league
Spartak finally ended Medvescak’s winning sequence with a shoot-out win in Zagreb. Tom Wandell got the decider after a 2-2 tie, while Jeff Glass made five saves in the shoot-out. It was the home side’s first loss in nine.

Dinamo Riga recovered a 0-2 deficit to sink Metallurg Magnitogorsk. A third-period turnaround led by Marcel Hossa and Kristaps Sotnieks was completed on 62:54 with Vitalijs Pavlovs’s winner.

A third-period fight-back couldn’t save Lev from defeat at home to Salavat Yulaev. The Ufa team opened up a 3-0 lead, and Igor Mirnov’s goal proved decisive despite two goals in a minute from Petr Vrana and Martin Thornberg.

Dinamo Minsk’s Dmitry Meleshko scored twice at home to Donbass – but in between his team conceded four allowing visitor to take a 4-2 win back to Ukraine.

Nikolai Kazakovtsev scored two as Severstal hit five for the second game in a row. This time Metallurg Novokuznetsk was the victim, going down 5-2. 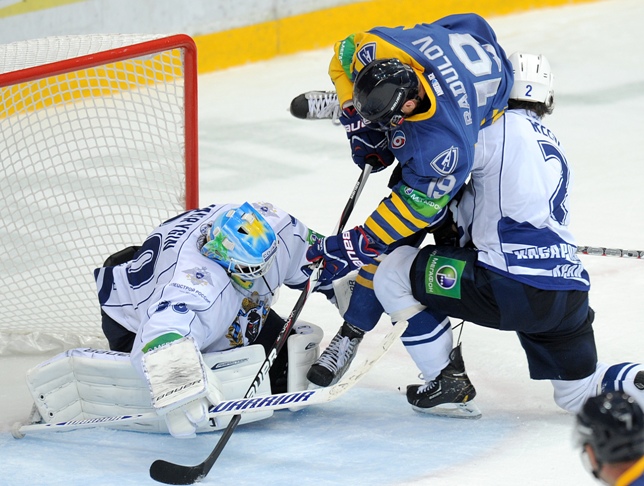