Two days can make all the difference in hockey, as Avangard demonstrated this week. Memories of that long losing run were firmly banished as the team romped to a 5-1 win over Torpedo, backstopped by new goalie Andrei Mezin.

True, there was a brief hiccup early on as Wojtek Wolski gave Torpedo a first-period lead. That was soon forgotten as two goals each for Alexander Popov and Andrei Ivanov, plus one more from Roman Berdnikov, saw Avangard to a second straight win. Two goals in the last minute as Torpedo desperately chased the game might leave fans in Nizhny Novgorod feeling hard done by, but this was definitely Avangard’s day. 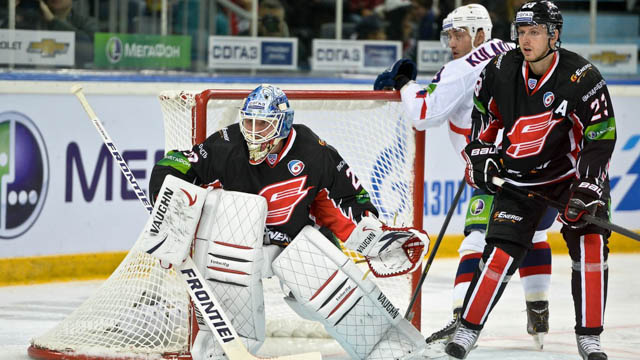 Ak Bars asserts itself
The much-anticipated clash between the Eastern Conference leaders promised a fascinating battle between the time-served masters of Ak Bars and the apprentices of Barys. While it was the Kazakh hosts who went into the game leading the table, the day ended with the familiar sight of Ak Bars out in front.

A 5-0 win for the visitor impressively underlined its own championship credentials, and perhaps offered a reminder to Barys that an impressive start is not the same as sustaining a campaign over a full season.

Most of the damage was done in the second period. After a hard-fought opening session saw Ak Bars sneak a 1-0 lead just before the interval, the second saw the Kazan team dominate. Outshooting Barys 13-3, goals from Mikhail Varnakov and Tomas Vincour stretched the advantage. The final session was more even in terms of chances, but Ak Bars added two more goals as Alexander Burmistrov completed a hat-trick of assists.

Around the league
Dynamo Moscow saw off a second-period fightback to win 4-2 at Avtomobilist. The home side surprised the defending champion by clawing back a 0-2 deficit to tie the game with goals from Artyom Chernov and Tobias Viklund. But Roman Derlyuk put Dynamo in front again early in the third, and Marek Kvapil completed the scoring late on.

Ugra had little difficulty beating Vityaz 3-1. First period goals from Kirill Knyazev and Anton Krysanov opened up a two-goal advantage that was too much for the visitor.