Games between Avangard and Vityaz have an unhappy history, but the latest chapter in one of the KHL’s bitterest rivalries finally brought joy to fans in Omsk. A 3-1 win for Avangard saw the team celebrate victory at the 10th time of asking – and happily there was nothing unusual to occupy the officials either.

Quickfire goals in the first period put Avangard in control: Sergei Kostitsyn on the powerplay and Denis Kazionov 25 seconds later made it 2-0. The defensive frailties of recent games were also banished: Vityaz managed just 13 shots on Denis Kostin’s goal, and even though Mark Iggulden pulled one back in the third, Alexander Perezhogin rounded out a convincing home win. Milos Riha finally tasted victory in his new job – and the Hawks will hope to rise swiftly on the wings of this long-awaited success. 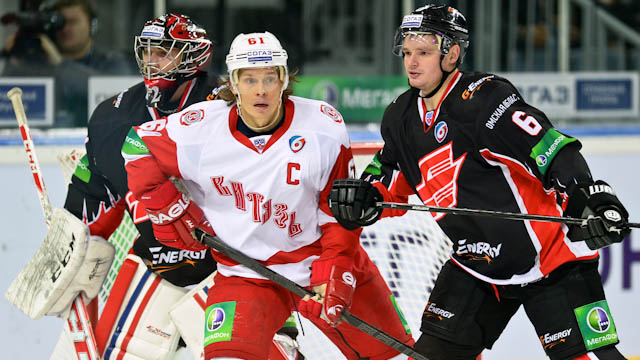 Barys edges Dynamo to lead the East
Both teams paid the penalty as Eastern Conference leader Barys hosted defending champion Dynamo Moscow as tempers frayed in the final session. But after a 3-3 tie, it was Barys which prevailed in an epic shoot-out where the teams shared 16 attempts before Dustin Boyd finally settled it.

At first it looked as though Barys had blown it: trailing 2-1 to a Martins Karsums powerplay goal late in the second, the home side saw the Latvian forward dish out more punishment on a 5v3 powerplay in the 49th minute. That thunderous one-timer, again set up by Filip Novak, perhaps should have been the decisive moment.

But Dynamo’s own discipline was found lacking: Roman Savchenko pounced within eight seconds of Barys earning a 5v3 of its own, cutting the deficit before captain Dmitry Upper swiveled for a neat finish to tie the game at 3-3 with 103 seconds left – inevitably on the powerplay once again.

Earlier Artemy Lakiza had put Barys back into the game with his first ever KHL goal: the defenseman had played 82 previous games without scoring but popped up to cancel out Alexei Tsvetkov’s opener.

Around the league
Ak Bars tied for the second game running, held 2-2 at Avtomobilist before Tim Stapleton gave the Kazan team the points in a shoot-out.

Kirill Knyazev settled an exciting game in Khanty-Mansiysk, giving Ugra the verdict by the odd goal in seven. He broke a 3-3 tie with just under nine minutes on the clock to cancel out Torpedo’s recovery from 0-2.