After scoring just once in three games, Traktor arrived at CSKA in need of a lift – and two goals from Andrei Kostitsyn gave the Chelyabinsk side a much-needed 3-1 win. He got going in the first period, swiveling neatly to fire past Rastislav Stana in the 11th minute, and wrapped things up with an empty-netter five seconds from the hooter.

In between, more unsteady CSKA defense helped Yegor Dugin make it 2-0 seconds into the second period. Sergei Shirokov got one back for the home side in the last five minutes, but the game was beyond the Army Men. With star forwards Alexander Radulov and Alexei Morozov both unavailable, CSKA welcomed back David Nemirovsky for this game – and reports suggest that 43-year-old General Manager Sergei Fedorov might get back on the ice in Friday’s game against Magnitka. 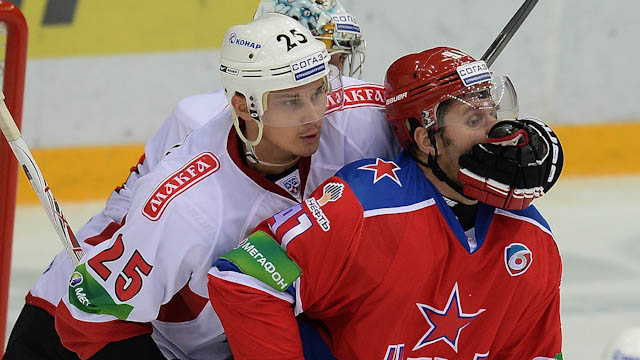 Sibir shocks SKA
SKA suffered a shock home defeat against Sibir, losing in a shoot-out after a 1-1 tie. The evening started out well enough for the Petersburg side, with Tony Martensson opening the scoring on the powerplay in the eighth minute after Dmitry Kalinin’s shot was blocked.

But the Army Men never really hit top form and failed to maintain any sustained pressure on Mikko Koskinen’s goal – and eventually Sibir took the chance to draw level through Ivan Lekomtsev early in the third. The teams remained inseparable until the shoot-out, where Dmitry Kugryshev won it for the visitor. He shot early on Alexander Salak to put away the decisive penalty shot.

Brust beaten at last
Medvescak goalie Barry Brust saw his run of three shut-outs ended in Minsk. He managed to keep Dinamo at bay for just over six minutes before Andrei Stas became the first player to score on him since Evgeny Blokhin of Barys back on September 28 – 201:54 of play time had elapsed since then.

Struggling Dinamo made it 2-0 soon after, but Medvescak was not about to give up its winning run. Ryan Vesce and Boyd Kane tied it up before halfway, then in overtime Jonathan Cheechoo grabbed the winner that that Croatians’ pressure deserved.

Around the league
Lokomotiv had a 4-0 win at home to Admiral, with goalie Curtis Sanford making 37 saves for his shut-out. Two goals in each of the first two periods put Loko in control. Kirill Kapustin and Yegor Averin led the scoring, each finishing with 1+1.

Two quick goals late in the second set Salavat Yulaev on course for a 5-2 win at Dinamo Riga. Igor Mirnov and Teemu Hartikainen scored within a minute, breaking a 2-2 tie and leaving the Latvians with too much to do.

Michal Vondrka’s second of the game was the overtime winner for Slovan following a 3-3 tie in Bratislava. Danis Zaripov (2+1) and Jan Kovar (0+3) were the key men in regulation as Metallurg Magnitogorsk recovered from 1-3 to force overtime, but it wasn’t enough for the visitor. The first period also featured an eighth-minute dust-up between Slovan’s Tomas Matousek and Yaroslav Khabarov of Magnitka.

Severstal snapped a three-game losing streak thanks to Vadim Berdnikov’s game-winner against Amur. He made it 3-2 early in the third, ending a Khabarovsk revival which had tied the game from 0-2.

Goals from Jakub Klepis and Michal Repik took Lev to a 2-0 home win over Neftekhimik.

Atlant managed just eight shots on goal at home to Metallurg Novokuznetsk – but still skated to a 2-1 win. Nikita Soshnikov and Yury Trubachyov proved that quality counts for more than quantity when it comes to testing goalies. 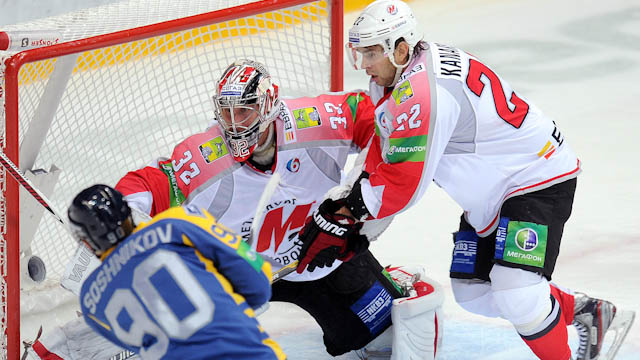