Young Nikolai Prokhorkin’s eighth goal of the season gave CSKA victory over Salavat Yulaev – but it was Igor Grigorenko who did much of the work. Playing against his former club, Grigorenko lured two defensemen behind the goal and escaped from their pressure to lay up a beautiful pass for Prokhorkin to fire into the roof of the net with seven minutes left.

Earlier CSKA had trailed, and even after quick goals from Yakov Rylov and Denis Denisov turned the game around midway through the first period Salavat’s Nikita Filatov had the satisfaction of scoring on his former team-mates to tie the game once more late in the second. 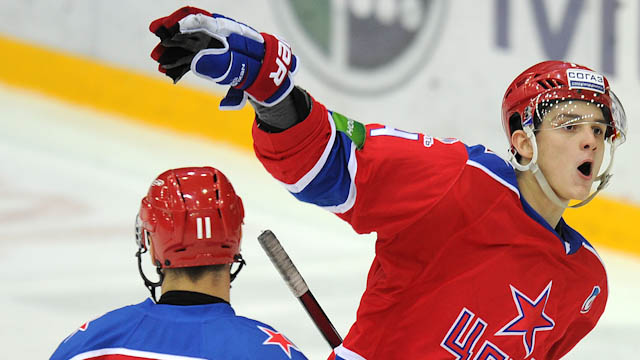 SKA survives a scare
SKA overcame a scare to beat Amur in overtime – but only after a 3-0 lead turned into a 3-3 tie. Viktor Tikhonov got the decisive goal after Artemy Panarin took the puck behind the goal and pushed it out in front for the forward to score from a tight angle. Panarin finished the game with 1+2 and another MVP award.

The league leader seemed to be in complete control when Vadim Shipachyov made it 3-0 in the 27th minute, but some indecisive defense play helped Amur claw back to 3-2 by the end of the session. It stayed that way until the last minute, then, with 20 seconds on the clock, Jan Mursak snatched a point for Amur when he forced the puck home from the slot.

Neftekhimik Brust aside
Medvescak’s Barry Brust picked up the latest goalie of the week award after back-to-back shut-outs, and promptly extended his unbeaten run to 195:37 with a third shut-out in his team’s crushing 6-0 win over Neftekhimik.

On Monday, though, most of the action was at the other end of the ice as the Zagreb team notched six unanswered goals. New arrival Matt Ellison marked his debut with a goal. Indeed, Ellison and his new line-mates Charles Linglet and Ryan Vesce dominated the first period, sharing six points between them as Medvescak opened up a 3-0 lead.

In the second session it was Jonathan Cheechoo’s line which came to the fore, with he and Matt Murley getting 1+1 on two powerplay goals before Patrik Bjorkstrand completed the scoring.

Lev loses at the last
A goal from Evgeny Timkin with just four seconds left to play saw Metallurg Magnitogorsk snatch a 3-3 tie in Prague – and in overtime things got even worse for Lev after Petr Vrana was called for interference and Chris Lee grabbed a last-gasp winner just 10 seconds into the powerplay.

It was a suitably exciting end to an entertaining game, in which Danis Zaripov twice scored for Magnitka before Vrana put Lev in front with seven minutes left. That looked set to be the winner until Timkin’s dramatic intervention.

Around the league
It took a long time in coming, but Lokomotiv’s Yegor Averin finally found a way past Novokuznetsk goalie Niko Hovinen to break a scoreless tie in the second minute of overtime. Hovinen had made 40 saves, but finally ran out of answers.

Ivan Lekomtsev struck on the powerplay late in the second period to take Sibir to a 3-2 win at Severstal.

Atlant came from behind to beat Admiral 2-1. Konstantin Koltsov struck the decisive blow on 46:29 after Maxim Mayorov had cancelled out Yegor Antropov’s opener. 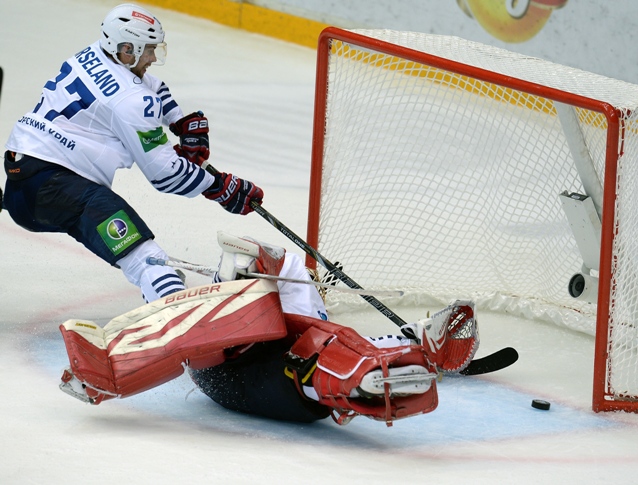