A dramatic finish at Spartak saw Barys hold off a late rally to return to the top of the Eastern Conference. The game had been drifting towards a tame conclusion as it entered the last 10 minutes with Barys maintaining the 2-1 advantage it had held since the first period.

But then it heated up: Mikhail Rakhmanov and Mike Lundin stretched the visitor’s lead to 4-1 with 2:09 left on the clock. It should have been game over, but Spartak refused to quit and roared back thanks to goals from Vyacheslav Kozlov and Rastislav Spirko to make it 3-4 with 26 seconds still to play. A final desperate siege of the Barys goal came to naught, though, as the Kazakh side continued its impressive start to the season. 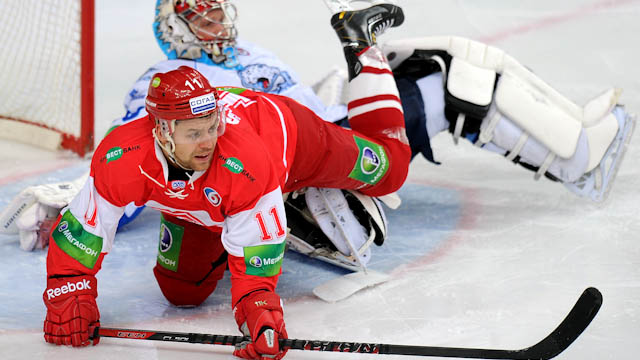 Big comeback for Neftekhimik
Neftekhimik staged a spectacular comeback to snatch an overtime win at home to Salavat Yulaev. Mikhail Anisin helped kick-start his team’s game with an assist on Maxim Berezin’s first goal, and he claimed the game-winner on 61:54 to take full advantage of a powerplay.

But before that it had seemed that Salavat would cruise to victory. Nikita Filatov opened the scoring inside the first minute, and by the 28th minute it was 3-0 to the visitor. That lead evaporated in the space of 10 second-period minutes, though, with Andrei Taratukhin tying it at 3-3 on 36:48. A cagey third session led to overtime, and once Kirill Koltsov fell foul of a slashing call Salavat ran out of options.

Around the league
Medvescak’s Barry Brust had his second shut-out in a row as the Zagreb side overpowered Avangard 4-0. After a scoreless first period, Medvescak took the lead with two powerplay goals either side of halfway. From then on the Bears never looked back – Brust had stood firm in the face of early pressure from Avangard, but at the other end Jonathan Cheechoo showed the visiting forwards how to finish with two goals. Hugh Jessiman and Andrew Murray also found the target. 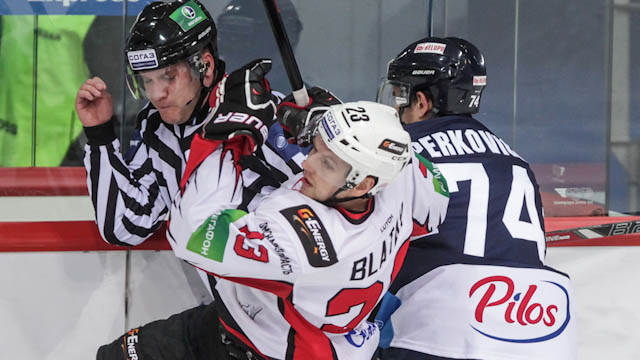 Donbass twice trailed, but rallied to beat Avtomobilist 4-2 in Donetsk. Sergei Varlamov and Evgeny Dadonov did the damage either side of the second interval.

Geoff Platt led the way with 2+1 for Dinamo Minsk as the Belarusians beat Ugra 5-3. The made it two wins in three for the Western Conference struggler, while Ugra finally eased its goalscoring problems only to suffer heartache in defense.