A change behind the bench has failed to transform Avangard’s fortunes, and Milos Riha slipped to his third straight defeat in charge of the Omsk side.

It was a goaltending nightmare early on in Donetsk, with Donbass firing in three goals in 11 minutes before Teemu Lassila was replaced with Denis Kostin. That had little effect though – by midway Donbass had scored five times from 11 shots on goal, and Vaclav Nedorost led the way with 2+1.

In the second half of the game things calmed down as the sides traded one goal each to finish at 6-1 for the Ukrainians. Avangard has now conceded 43 goals in 10 games – 12 more than the next worst record in the Eastern Conference, and nine more than Medvescak, the league’s second-leakiest defense, had given up in 11 games. 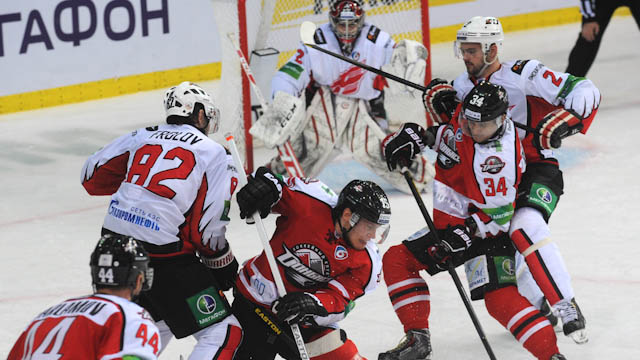 Barys bounces back
Brandon Bochenski scored three as Barys returned to winning ways in Minsk. Saturday’s defeat to Medvescak was only the Kazakh side’s second of the season, but its swashbuckling attack was back on song to sink Dinamo 5-2.

Bochenski was the key man: he scored twice in just over two minutes midway through the second period to overturn a 2-1 deficit, and went on to complete the scoring with a short-handed effort in the third. Roman Starchenko and Talgat Zhailauov were also on target for Barys; Oleg Goroshko and Alexei Yefimenko got two in quick succession for Minsk early in the second.

Biryukov denies Spartak
Goalie Mikhail Biryukov showed why he twice featured in Russia’s World Championship winning squads with a fine display at Spartak. He pulled off 36 saves to help Ugra to a 1-0 win and maintain the Khanty-Mansiysk team’s impressive record against this opponent in the KHL.

The only goal came out of nothing in the 47th minute, thanks to smart work on the slot from Jonas Andersson. The Swede had his back to goal, but managed to swivel and sweep a low shot past Jeff Glass. That makes it six wins in seven games between Ugra and Spartak. 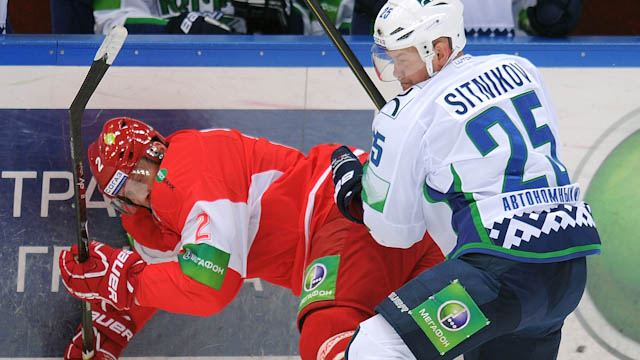 Medvescak maintains hot streak
Two goals from Matt Murley saw Medvescak defeat Avtomobilist 3-0 to make it four wins on the spin. Murley had a goal in the first and last periods, and contributed an assist on Jonathan Cheechoo’s second-period strike, while Barry Brust made 32 saves for the Zagreb team’s first ever KHL shut-out.