A combination of errant passing and clinical finishing decided the first Ural derby of the season, with Metallurg Magnitogorsk powering to a 5-0 win at Traktor Chelyabinsk. The damage was done in the first period, with Anton Shenfeld firing home a one-timer early on and Sergei Mozyakin making the most of a blue-line turnover after Dmitry Ryabykin’s wayward pass from defense put his team in trouble. In between Traktor might have leveled, but Konstantin Panov was denied first by a foul from Rinat Ibragimov, then by a save from Vasily Kosechkin from the subsequent penalty shot.

Things did not improve for the home side: a wonderful pass from Chris Lee sent the puck almost the full length of the ice and released Mozyakin for a second one-on-one with Mike Garnett – and a second precise finish made it 3-0. Yaroslav Khabarov and Justin Hodgman completed the scoring; Koshechkin finished with 34 saves. 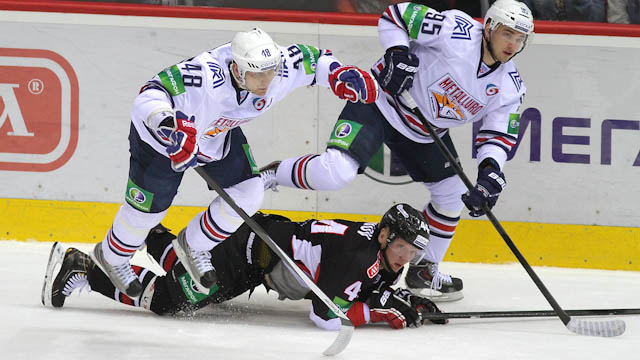 Barys out in front
Two goals from Dustin Boyd set Barys on its way to another victory – and kept the Kazakh side out in front in the Eastern conference. The latest win – 2-4 – came at Donbass, a side which returned home in good spirits after wins at Severstal and SKA, and made it seven successes from eight for the Astana outfit.

The damage was done in the space of three first-period minutes, with Boyd’s two goals sandwiching a Fyodor Polishchuk strike to open up a 3-0 lead. Evgeny Dadonov pulled one back, and Donbass dominated much of the second session, but right before the hooter Maxim Spiridonov added a fourth for the visitor. The final stanza saw Lukas Kaspar reduce the deficit, but Barys held on with something to spare.

Around the league
Medvescak got a second successive win, coming from behind to beat Ugra in Zagreb. Brian Willsie got the winner in the 53rd minute, just seconds after Yugra had successfully killed a 3v5 penalty situation. Earlier Jonathan Cheechoo had cancelled out Nikita Gusev’s opener.

Atlant made it four wins from four following the dismissal of Sergei Svetlov, downing Vityaz 3-1 in Mytishchi. Second period goals from Sergei Shmelyov and Juha-Pekka Haataja set the home side on its way to victory, despite Maxim Afinogenov’s second of the season for Vityaz. 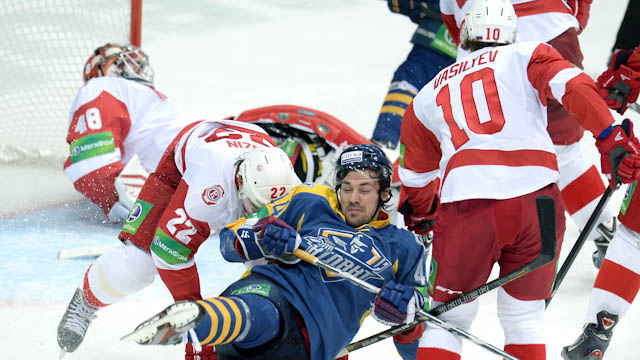 Avtomobilist defeated Spartak in a shoot-out after a 1-1 tie in Moscow. Filipp Toluzakov settled matters after Fyodor Malykhin had cancelled out Alexei Krutov’s goal in the second period. 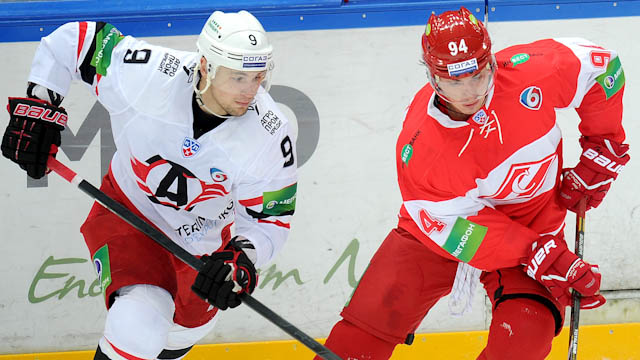