In Riga and Prague two Finnish guests made themselves unwelcome – helping Torpedo and Ak Bars to wins over Dinamo and Lev respectively.

It was Sakari Salminen’s day in Riga – but the Finnish forward left it late to grab a 3-2 win for Torpedo over Dinamo. The decisive goal came with just 35 seconds left as Tim Brent’s pass across the slot evaded goalie Jakub Sedlacek and presented Salminen with an open goal.

In truth, Dinamo can feel aggrieved that it didn’t turn its dominance into goals earlier: the Latvians outshot Torpedo 31-18, but still trailed 2-0 after 26 minutes, with Salminen scoring one and getting the assist on Juuso Heitenan’s opener. Two powerplay goals tied it up before the second interval, but Dinamo could not find a way through in the third and was felled by Salminen’s sucker punch at the last.

Salminen’s compatriot Janne Pesonen (pictured) also scored two, assisted each time by Alexei Tereshchenko, as Ak Bars took a 2-1 win at Lev. Niklas Danielsson reduced the deficit early in the third, but the lions could not roar back into the game. 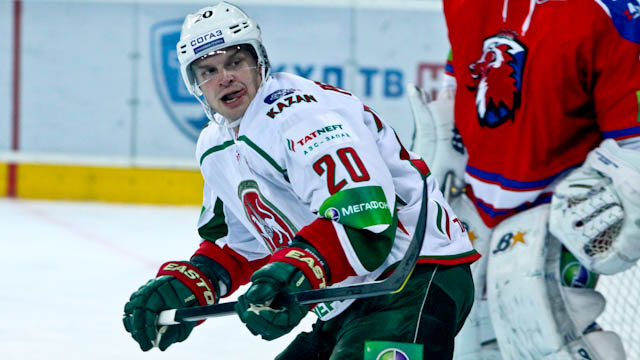 Dynamo fightback sinks Slovan
Dynamo Moscow snapped a three-game losing streak – but had to do it the hard way to win 5-4 in Bratislava. Slovan, the only team in the competition without a regulation time win so far, led 3-1 after 40 minutes and seemed well placed to extend Dynamo’s travel-sick sequence to 0-4 on the road after Peter Olvecky gave his team a two-goal cushion late in the second.

But the defending champion reacted well to the pressure, storming out of the blocks in the third and tying the game within four minutes. It was the first line which did the damage, with Maxim Pestushko and Dominik Granak bringing the scores level. Pestushko combined with Leo Komarov to set up Maxim Solovyov’s go-ahead goal on 47:06 and the shell-shocked host shipped another soon after as Dynamo made it four in barely seven minutes through Konstatin Gorovikov. Martin Bakos pulled one back with five to play, but Slovan could not save itself.