Avangard welcomed new head coach Milos Riha to Omsk, but the party atmosphere before Sunday’s game quickly evaporated after another heavy defeat. Riha flew into the Siberian city on the morning of the clash with Yugra, and his presence gave a boost to the club’s supporters who turned out in force to greet the new boss.

But his presence for his first official engagement as head coach could not inspire an immediate change in his new charges’ fortunes – Yugra coasted to a 6-2 victor, making it four heavy defeats on the spin for Avangard. The outcome was settled in the second period, with Yugra scoring four unanswered goals and sending starting goalie Teemu Lasilla back to the bench in the 38th minute.

Riha now has almost a full week to prepare his team for its next game, and in particular to improve a defense which has conceded 19 in four games. And he can look forward to another lively reception on Saturday when he takes Avangard to Spartak, one of his former KHL clubs. 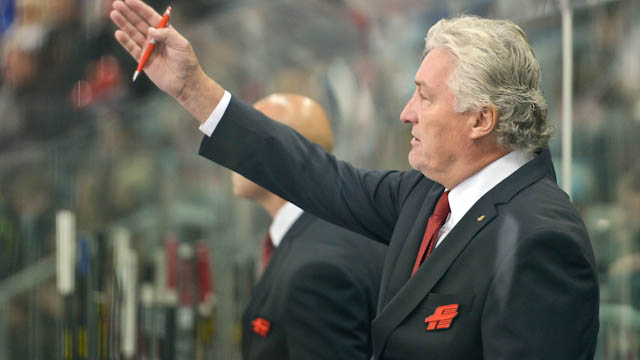 SKA stopped at last
After seven successive victories from the start of the season, SKA’s perfect record was finally dented by Donbass. The Ukrainians came to Petersburg and opened up a 3-0 lead by midway, thanks to two goals from Maxim Yakutsenya and one more from Randy Robitaille.

Stung into action, SKA peppered Michael Leighton’s goal with shots but could only produce two powerplay goals – both from Patrick Thoresen – despite a frantic finish which saw goalie Ilya Ezhov called to the bench for more than two minutes as the home team desperately tried to force overtime. In the end, though, it was Donbass which profited thanks to a last-second empty netter from Evgeny Dadonov to make it 4-2.

Barys full of goals
The early-season pacesetter in the East is Barys Astana, and the Kazakh side confirmed top spot with another emphatic win. This time it was Avotmobilist’s turn to suffer, going down 7-2 despite racing into an early lead.

Two goals in 32 seconds put Avto ahead in the eighth minute, but two goals each for Talgat Zhailauov and Roman Starchenko got Barys back on track for its sixth win in seven games. More impressively still, the team has blasted home 40 goals – comfortably the best in the league and seven more than SKA’s free-scoring frontline has managed so far.

Around the league
Traktor proved too strong for Admiral, winning 3-1 in Chelyabinsk. After a 1-1 tie in the first, Petri Kontiola got the game-winner early in the second. 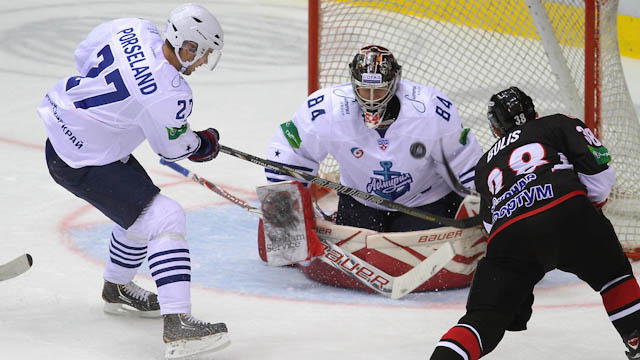 Lokomotiv had a comfortable 4-1 win at home to Dinamo Minsk, making it two wins from two since the return of Pyotr Vorobyov behind the bench. Staffan Kronwall gave Loko an early lead, and although Alexei Kalyuzhny tied it up in the second there was no respite for the struggling Belarusians. Vitaly Vishnevsky reinstated the lead, David Ullstrom and Daniil Apalkov made the win safe.

Spartak needed an overtime goal from Mikhail Yunkov to break a 4-4 tie at Severstal. Earlier Rastislav Spirko had scored twice for the visitor, but it still took a Matt Anderson goal in the 55th minute to cancel out Vadim Berdnikov’s effort and force the extras.

For the second time in three days young Czech forward Jan Kovar scored two early goals to set Metallurg Magnitogorsk on the way to a big win. This time Amur was the victim, and Magnitka cruised to a 6-1 success.

Atlant beat Medvescak in overtime following a 2-2 tie. Evgeny Artyukhin got the vital goal after Mathieu Carle had tied it up for the visitor with just 80 seconds to play. 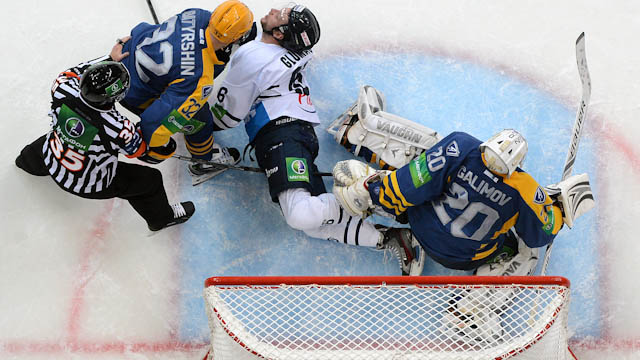 Two goals early in the third proved sufficient to take Neftekhimik to a 4-3 home win over Sibir. Andrei Taratukhin and Mikhail Anisin struck in the first five minutes of the session.

Salavat Yulaev edged out Metallurg Novokuznetsk by the odd goal in seven. Kirill Koltsov got the winner, touching home an Dmitry Makarov pass from the right early in the third period.