CSKA served up another reminder of its potential to launch a serious title challenge this season, following up Tuesday’s Moscow derby win with a solid 2-0 win against Ak Bars. The home side always had the edge, despite the absence of players of the caliber of Nikita Zaitsev, Yakov Rylov and former Kazan hero Alexei Morozov, and took control of the game in the second period.

Igor Grigorenko broke the deadlock on the powerplay, firing home from mid-range after Alexander Radulov’s pass from the red line picked him out. From then on the visitor was on the back foot, with Sergei Shirokov and Ilari Filppula both going close before the Finn got his first CSKA goal just after halfway. It was a good one too, as he bamboozled Barulin in the Ak Bars goal before sliding the puck through the five-hole to wrap up a slick passing move.

For Ak Bars it was a frustrating evening. Rastislav Stana made23 saves to keep the visitor at bay, but most of the problems came from weak play in center ice where the puck was turned over too cheaply, too often. That kept the pressure on, leading to a steady flow of minor penalties which ensured Ak Bars could not achieve any momentum. 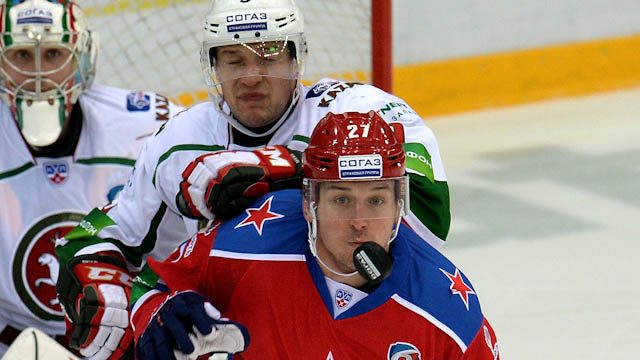 Waiting for the Riha effect
Avangard announced that Milos Riha would be taking charge of the team on Thursday morning, but the experienced Czech coach had no chance to help his underachieving new team in Yekaterinburg, as he is still at home waiting for Russian visa. In his absence two goals from Fyodor Malykhin helped lowly Avtomobilist to a 4-1 win over his new charges.

For the third game running Avangard lost heavily, this time against opposition which could not be regarded as more than modest. Riha, with his experience of turning around troubled campaigns, needs to start working his magic as soon as possible here.

Barys on top
Barys climbed to the top of the Eastern Conference with a powerful 6-2 win at Yugra. Dustin Boyd led the way with two goals to secure the win in the final period; Dmitry Upper’s penalty shot set the Kazakhs on their way in the fifth minute. Yugra’s second successive defeat means its brief flirtation with the top of the conference seems to be at an end.

Around the league
Paul Szczechura scored in the last second to rescue a 2-2 tie for Dinamo Riga – who went on to sink Dynamo Moscow in a shoot-out. Two goals from Maxim Pestushko seemed to have won it for the defending champion, but Riga staged a dramatic comeback and Vojtech Polak settled it in the shoot-out to send Dynamo to a second successive defeat. 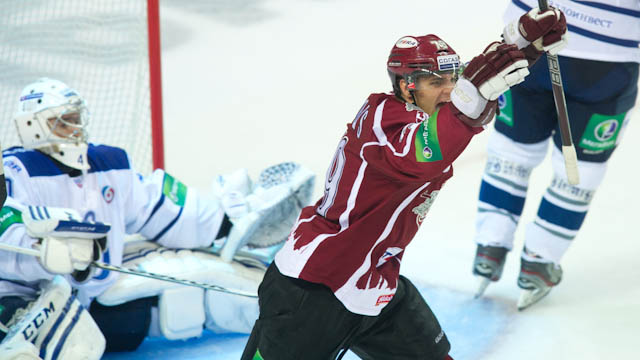 Struggling Slovan lost again, going down 4-1 at home to Vityaz. The visitor did the damage early, with two goals in two minutes midway through the first period, and was able to ease off in the closing stages, managing just one shot in the final session.

Lev recovered a 1-3 deficit before winning a shoot-out at home to Torpedo. The win was extra sweet for Martin Thornberg, an ex-Torpedo forward who tied the game in the third and went on to score in the shoot-out.