Young CSKA forward Nikolai Prokhorkin is still cementing his place in the senior roster, but his 20th birthday brought him a gift that might help to do just that. The youngster scored his first KHL hat-trick – and it could not have come at a better time for him. His treble helped his team to a 6-3 derby win over Dynamo, exacting some revenge for last season’s play-off exit and inflicting a first loss of the season on the defending champion.

Aside from a brief wobble at the end of the second period, CSKA controlled this cross-town clash. Birthday boy Prokhorkin opened the scoring on 10 minutes, and then got involved as Ilya Zubov doubled the lead. Maxim Karpov, another youngster, pulled one back for Dynamo before the hooter, but Prokhorkin got his second soon after the interval to give the Army Men breathing space once more.

Dynamo thought it had stemmed the tide, though, when a quickfire pair from Alexei Tsvetkov tied the game in the 38th minute, but CSKA would not be denied. Admittedly, Prokhorkin’s hat-trick goal had a sizeable slice of good fortune about it after it looped off Alexander Yeryomenko and bounced into the net off the forward’s head and shoulder, but the video official ruled it fair – and it proved to be the game winner. Oleg Saprykin and Zubov’s second completed the scoring, ruining Yeryomenko’s impressive early season stats and shattering Dynamo’s undefeated run. Now only SKA can boast a 100% record, with five wins from five. 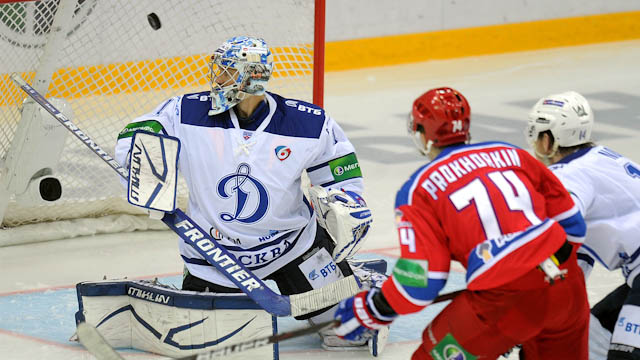 Barys win sees Matikainen fired
Barys maintained its bright start to the season with a 5-2 win over Avangard. Brandon Bochenski got things off to a perfect start, opening the scoring on 22 seconds, and two goals in the final session from Maxim Spiridonov sealed the success. The defeat marked the end of Petri Matikainen’s spell in charge of Avangard after his team slumped to a second heavy loss in three days.

Around the league
Ak Bars became the first team to beat Dinamo Riga in regulation this term, winning 3-1 in Latvia. The Kazan side’s leading point scorers were all on the mark again, with Shaun Heshka and Alexander Burmistrov scoring one goal each, while Tim Stapleton chipped in with two more assists.

Wojtek Wolski scored his first KHL goals to help Torpedo to victory at Slovan. The Polish-Canadian struck twice in his side’s 3-0 win, while Peter Olvecky missed a penalty shot for the Slovaks.

Lev powered to a 4-1 win at home to Vityaz, with two goals from Martin Thornberg leading the way.