In Moscow the first local derby of the season produced an unexpected result, with Spartak edging CSKA 3-2. Alexander Radulov put the Army Men ahead in the first period, collecting Igor Grigorenko’s pass and going through one-on-one to beat Jeff Glass. But in the second session the home side took command, out-shooting CSKA 15-4 and scoring twice through Vyacheslav Kozlov and Igor Volkov. A Deron Quint slapshot on the powerplay made it 3-1 before Oleg Saprykin pulled one back late on. Glass pulled off took big saves in the closing stages to deny Ilari Filppula and Nikita Zaitsev as Spartak held on. 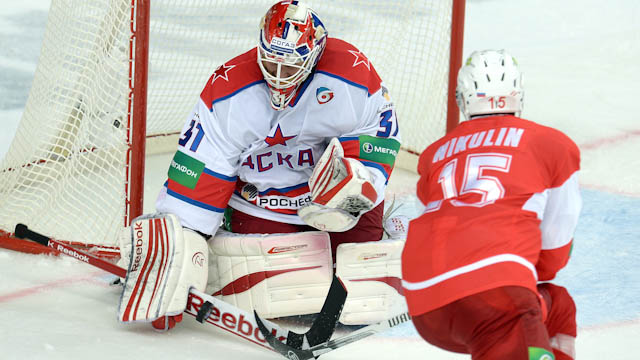 Eastern surprises
Yugra is the surprise leader in the Eastern Conference after picking up its third win from four at home to Severstal. Despite conceding first, the Khanty Mansiysk side recovered to complete a 3-1 success. The key blows came in quick succession. Seasoned forward Igor Skorokhodov put his team ahead on 16:46 and within a minute defenseman Mikhail Tyulyapkin had stretched that advantage. There was no further scoring after the first period as Yugra went one point clear of Avangard in the East.

Avangard itself beat Atlant 4-3, continuing the Moscow Region side’s unhappy start to the season. Tomas Zaborski scored twice, but the winner came in the 49th minute from Valentin Pyanov.

Kovi strikes again
In the West, meanwhile, there are no surprises. SKA joins defending champion Dynamo Moscow on top of the section after making it four wins from four at Barys. Ilya Kovalchuk was involved once again, posting 1+2 in his team’s 5-2 success. The result was secured in the second period, when goals from Alexei Ponikarovsky, Roman Cervenka and Dmitry Kalinin saw SKA stretch its slender early lead to a commanding 5-1 advantage.

Dinamo Riga is the third team in the section with a 100% after securing its third win of the campaign at Donbass. The Latvians won 4-2 thanks to a hat-trick from Kyle Wilson and Marcel Hossa’s first goal following his return to Dinamo.

Ak Bars holds on
In Kazan the home side picked up its first regulation win of the season, downing rival Metallurg Magnitogorsk 3-2. But Ak Bars had to withstand a late fightback as Magnitka battled back from 0-3 thanks to goals from Chris Lee and Yaroslav Khabarov in the last 10 minutes. It wasn’t quite enough for the visitor, though, with Dmitry Obukhov’s 47th-minute goal proving just enough to win it. Magnitka now heads home looking to improve on a run of just one win in its opening four games under Mike Keenan. 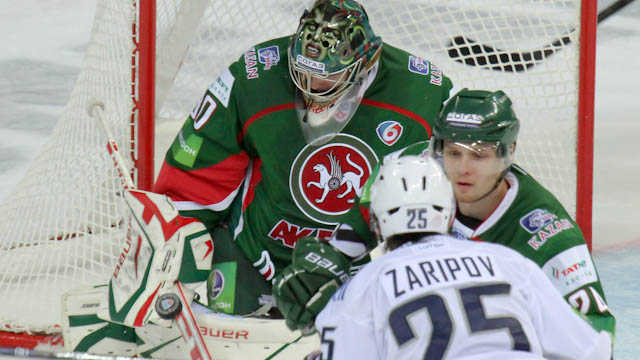 Around the league
Lokomotiv got its first win of the season, overpowering Avtomobilist to win 4-0. First period goals from Sergei Plotnikov and Yegor Averin put the Yaroslavl side in charge, Curtis Sanford made 28 saves. Loko’s win means the Slovan goes to Medvescak tomorrow as the only team in the KHL yet to manage a point.

Lev maintained its encouraging start with a 3-1 win at Dinamo Minsk. The game was level in the early stages, but goals from Tomas Kubalik and Jiri Sekac towards the end of the second period gave the Czechs the edge.

Neftekhimik ended its dry spell in front of goal, and picked up a 2-0 win at Torpedo. Goalie Alexander Sudnitsin made 31 saves, Nikita Shchitov and Oscar Osala got the goals.

Stefan Ruzicka’s third-period goal was enough to give Salavat Yulaev the verdict at Vityaz by the odd goal in five, despite two goals from the home team’s Anton Korolyov in Podolsk. 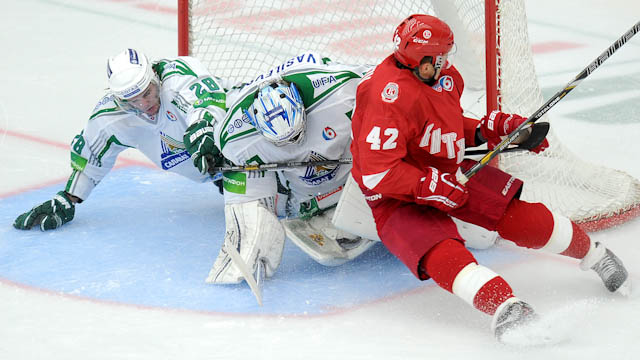