KHL and Chevrolet – forward together for 3 more years

On the 3rd of September, the Kontinental Hockey League’s Moscow office hosted a ceremonial signing of a sponsorship agreement between the KHL and Chevrolet.

Chevrolet has been supporting Russian hockey since 2010 and is the exclusive automobile partner of the Championship with the status of Official KHL Sponsor and Official KHL Automobile.

And on Tuesday, Chevrolet made yet another contribution to its continuing support of hockey by extending its exclusive sponsorship contract with the League for three more seasons.

“Our cooperation with Chevrolet has been a highly significant one for the League,” said Ilya Kochevrin, the KHL’s Commerce and Communications Vice-President, at the signing. “Chevrolet was the first mass-market brand that recognized the strength of the KHL brand. Over the past three years Chevrolet has set down its priorities and despite competition from other automobile manufacturers hoping to strike a cooperation deal with the KHL, we decided that the best choice was still Chevrolet, our reliable partner.

For the League, the conclusion of a new three-year deal means money, first and foremost, but I must stress that the most important thing for us is being associated with such a powerful, global auto company with worldwide production. This brand is very popular in Russia, where it hovers between first and second place in the country’s auto sales standings, and I’m sure that the Russian market is the best in the world for Chevrolet. It is therefore no coincidence that this brand chose hockey and the KHL.

We will continue with the joint promotions that proved so popular during the previous agreement. I’m sure all remember the Chevrolet Tahoe’s epic journey from East to West, eventually reaching Helsinki and Stockholm for the 2013 World Hockey Championship. We are very satisfied with the results; the KHL brand received a lot of exposure.” 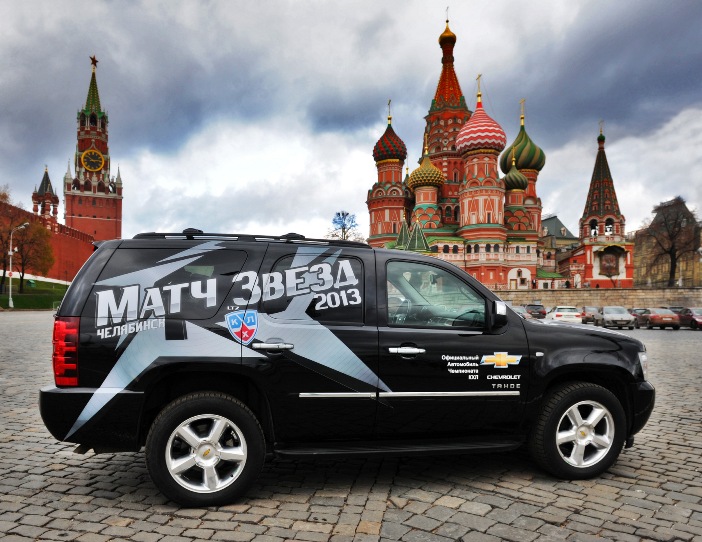 Over the years, Chevrolet has conducted many events devoted to promoting the sport: actively supporting the youth league, the YHL, helping to raise the profile of the KHL and its players, both established stars and rookies, at the 2012 Moscow International Automobile Salon, and top Chevrolet staff have traveled the length and breadth of the country, organizing local events and creating special promotions in which hockey fans could win their very own Chevrolet.

“Hockey in Russia is not just a popular sport, it's the number one sport - a sport in which Russians have achieved the most outstanding results and seen their names inscribed in world hockey history, while the Chevrolet brand has earned cult status all around the world and especially in Russia, where for six straight years it has topped the best-seller rankings among foreign car producers,” Chevrolet Russia and CIS Managing Director Alexander Migal said after signing the contract. “We are proud that thanks to our partnership with the KHL, Chevrolet cars have become an integral part of this brave and beautiful sport.”