Ready for the off!

It’s show time! Last season’s grand finalists, Dynamo Moscow and Traktor Chelyabinsk are set to renew battle in a few hours’ time as the sixth KHL season gets underway in the Russian capital. A capacity crowd is expected at Luzhniki to see how the defending champion shapes up against one of its closest rivals. 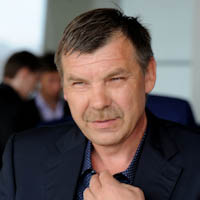 All right on the night?
But many of those fans might be forgiven for wondering if Dynamo’s class of 13-14 is capable of living up to the standards of those back-to-back title winners. Pre-season has not been impressive for the Blue-and-Whites, culminating in a painful Mayor of Moscow Cup last weekend which saw Oleg Znarok’s team fail to win a single game. That led to a full and frank exchange of locker room views after the 2-5 reverse at the hands of Spartak.

Znarok (left) himself has sought to play down criticisms. Following the Moscow tourney he insisted everything would be ready for Wednesday’s big game. “At Dynamo everyone is a general, or more accurately we’re a disciplined infantry,” he told Sport Express. “We use this principle to gather guys with amazing character, we recruit a team. We learn about a person through the players themselves, here nobody is allowed to fall.

Others in the camp have also been making the right noises; goalie Alexander Yeryomenko, play-off MVP last time round, told Sport Express: “We need to play better, we are making tactical and technical errors. But in the end this is no big deal. We’ll talk about it, and I think we’ll get results. Leo [Komarov] has come, and a lot of new guys, all good players. Everyone is fit, so there is something positive for the team. We will get results.”

However, the roster faces some questions about its ability to seal an unprecedented hat-trick of championships. At times last season the team seemed short of a player who could produce a game-changing moment of flair, a loss made more acute by the embarrassment of riches during the lock-out when Dynamo called up Alexander Ovechkin and Niklas Backstrom. The likes of the whole-hearted Komarov and the returned Maxim Pestushko don’t quite have the same devastating potential to deliver game-breaking moves, although young Maxim Karpov did enough for Traktor in last year’s play-offs to suggest that he might mature into a big star. This season, though, might be too early for him to offer more than flashes of brilliance.

On defense the loss of Ilya Gorokhov (now at Lokomotiv) will also have significant implications. Dynamo’s gameplan relies on a strong, relentless defense which has consistently blunted the KHL’s most dangerous offenses. Gorokhov was a big part of that, and it won’t be easy to replace his game time and influence without disrupting the work of the team’s engine room. 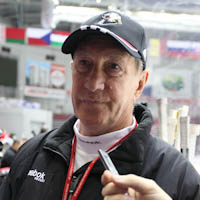 Call for Kuznetsov
In Chelyabinsk, head coach Valery Belousov (right) knows that his best chance of going one better than last year’s runner-up slot might lie with Evgeny Kuznetsov. It’s hard to imagine he’s still only 22, given the microscopic attention that has followed him since he skippered Russia’s under-20s to World Championship glory. That team earned fame for its determination and a series of spectacular comebacks – it never knew when it was beaten. Kuznetsov has opted to remain in Russia for at least one more season, perhaps with an eye towards Sochi, rather than join his highly-rated clubmate Valery Nichushkin in North America. That gives him one more chance to produce the kind of sparkling play-off performance he’s capable of, but has so far yet to deliver.

Meanwhile, the man himself is dreaming of captaining Traktor, if only for a single game, and looking for a successful season before finally crossing the Atlantic. “I need to be more of a team player, even at the expense of my own ambitions” he told R-Sport. “And of course I want goals and assists in every game to bring the team victory. But of course it’s impossible to do that every time. You have to work as part of the team. And our goal, of course, is to win the Cup.”

Elsewhere, the departure of Karpov and Nichushkin has dismayed fans and a reshaped offense will look to Anton Kuryanov and Lauris Darzins for added firepower. Both could benefit from a change of scenery: Kuryanov’s role in the national has diminished of late, while talented Latvian forward Darzins struggled to repeat his Riga heroics in Kazan last season. At the back, Scrooge-like goalie Michael Garnett continues to give little away, while the arrival of Renat Mamashev from Neftekhimik should compensate for the loss of Deron Quint, who surprisingly switched to Spartak.

Success in the team’s home warm-up tournament has added to the optimism around the club, and after a bright pre-season Traktor heads to Moscow and the start of the regular season with only one goal in mind – going one better than a year ago.