10m rubles to good causes, From a Pure Heart

Ilya Kovalchuk’s home town of Tver hosted a charity game on Sunday featuring the former NHL star and a host of other famous names. The event was part of the From a Pure Heart program, formed to raise money to aid the most vulnerable victims of various tragedies.

Four years ago, Kovalchuk was one of those who came up with the idea of staging such games in Russia as a way of diverting funds to deserving causes, and by 2010 the first game took place in Moscow’s Sokolniki Arena. The result - several million rubles was collected and sent to aid the victims of the fires which broke out across central Russia during the severe summer heatwave of that year.

“The thought occurred all of a sudden,” Kovalchuk recalls, “We held a joint training session with the guys, and somehow this wonderful idea formed. Then, when I flew back to Moscow, like everyone else I was deeply moved by the terrible situation brought about by those fires. People were suffering, their homes had burned down, and many were in need of help. Events like these should bring some relief to the people affected.”

Since then a star-studded squad of hockey players, artists and politicians has staged charity games in Magnitogorsk, Kazan and St. Petersburg, in addition to Moscow, and the money raised has reached orphanages, children in need of expensive medical help, and last year, on the eve of the anniversary of the Yaroslavl disaster, over 17m rubles was presented to the families of the Lokomotiv players who perished. This time, Kovalchuk decided to invite his friends to his home town of Tver, a city where they not only remember him, but adore him. The townsfolk fully justified Ilya’s choice of venue by snapping up all the available tickets in just two hours, while those not lucky enough to attend the game gathered to watch the action on a huge screen set up for the occasion.

The participants traveled to Tver by land and air. Most of the players took advantage of a special train which set off from Moscow’s Leningrad Station at 13:15, reaching their destination a mere 90 minutes later, but Alexei Morozov, one of the team captains, arrived in his car while a helicopter delivered Evgeny Malkin, Alexei Kasatonov and the acting Governor of Moscow Region, Andrei Vorobyov.

Those who took the train were welcomed by a large and illustrious reception committee headed by Governor of Tver Region Andrei Shevelev, who then accompanied Kovalchuk and Russia’s Deputy Prime Minister Arkady Dvorkovich to face questions from the assembled media.

“Good deeds like this do not happen very often,” said Governor Shevelev. “I’m grateful to Ilya that our hockey fans have the chance today to see so many star players together on the ice. Ilya is a real patriot regarding his home town. All the proceeds we receive from today’s From a Pure Heart event will go to child welfare institutions in Tver Region.”

The biggest surprise for the fans in Tver came in the ceremonial opening face-off. Accompanying Russian Hockey Federation chief Vladislav Tretyak onto the ice was another sporting legend, the double Olympic pole vault champion Elena Isinbayeva. The national heroine had only recently finished competing in the World Athletics Championships, yet her smile was as radiant as ever as she wished all the hockey players the best of luck and elegantly dropped the puck onto the ice. 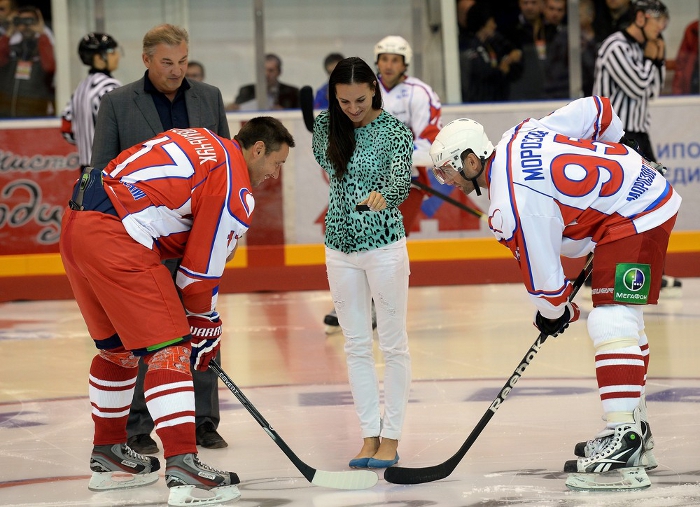 “I’ve known Ilya a long time, so when he invited me to do the opening face-off I agreed at once,” Isinbayeva said. “Although I did ask whether I’d have time to get off the ice safely after the face-off and he assured me that I’d be fine. I’m not a bad skater myself and I can even do the arabesque, so I’m no stranger to winter sports. It would be good thing if we held these kinds of events in athletics.”

Captain of Team Morozov for the day was, appropriately enough, Alexei Morozov senior – the father of the CSKA forward, while taking the helm of Team Kovalchuk was Viktor Zhukov – coach and mentor to the future star when Kovalchuk was only seven. Zhukov, a charming and modest man, appeared a little overwhelmed at being in the limelight, and during the pre-game social whirlwind seemed reluctant to stray too far from the side of his most famous protégé. His sense of humor, however, has not deserted him: “With so many famous players here,” he remarked, “how could they not send for me?”

Among the organizers of the charity game were Spartak and Sibir, so Team Kovalchuk included current Red-and-Whites Matt Anderson, Vyacheslav Kozlov and Alexander Trushkov to add to the talent already on display. The first goal of the game, however, came from an unexpected source - Dmitry Bosov, Chairman of the HC Sibir Council of Trustees. His Team Morozov comrade, Alexander Radulov, spent the first shift in defense, but his attacking instinct proved too strong for tactical shackles and in the second period he hit a blistering hat-trick. Such games favour the forwards and this was no exception. By the time the final hooter sounded, the nets had been rattled 33 times, and Team Kovalchuk celebrated a swashbuckling 17-16 victory.

“The third period ended too early, which is why we won," Ilya said after the game. “I don’t remember any team winning one of these games before – we usually end on a tie. I took enormous pleasure from today. My family, friends and classmates were at the game and the fans gave us the warmest of welcomes. I’d like to thank Governor Shevelev. He does a great deal for the development of hockey in Tver, and I hope that one day soon we’ll see a modern arena here with space for 7-8,000 spectators.”

In total, 10,000,000 rubles (a little over $300,000) was raised by the event. While that money is being distributed to the needy around Tver Region, the stars themselves are on their way to Saint Petersburg, where on the 31st of August they play again to raise more money for a good cause, From a Pure Heart.