The World U20 Championship came to a close with a thrilling and action-packed final day’s play in Ufa on Saturday.

The day opened with a glittering presentation dedicated to the next tournament, to be held in the Swedish city of Malmo. It was then time for Russia and Canada to contest the battle for the bronze, and the game got off to an explosive start with Alexander Khokhlachyov and Nail Yakupov scoring for the hosts within the first five minutes. The visitors regrouped admirably, and soon Ryan Nugent-Hopkins had reduced the deficit, but when defenseman Kirill Dyakov restored Russia’s two-goal cushion, the Canadian bench decided that something had to change and sent Malcolm Subban on to replace Jordan Binnington in goal. Four minutes before thebreak, Jonathan Huberdeau made it 3-2.

It was telling that both of Canada’s goals came in powerplay. Not for the first time in this tournament, all Russia’s good work had been undone by picking up unnecessary penalties and being too timid when short-handed.

The second period continued in a similar vein, with two more powerplay goals for Canada separated by an emphatic finish from Evgeny Mozer. Nail Yakupov gave Russia a 5-4 lead with his second of the day a minute into the final stanza, but the country which gave birth to the game was not going to wave goodbye to a medal without a fight, and hit back yet again through Brett Ritchie.

Mikhail Varnakov’s juniors now faced their third successive overtime, only on this occasion they managed to give the fans a swift and happy ending. A mere 95 seconds into added time a superb solo strike from the youngest player in the Russian roster, Valery Nichushkin, clinched the bronze medal for the home nation.

In the final, the USA took the world crown from defending champion Sweden with a 3-1 victory. 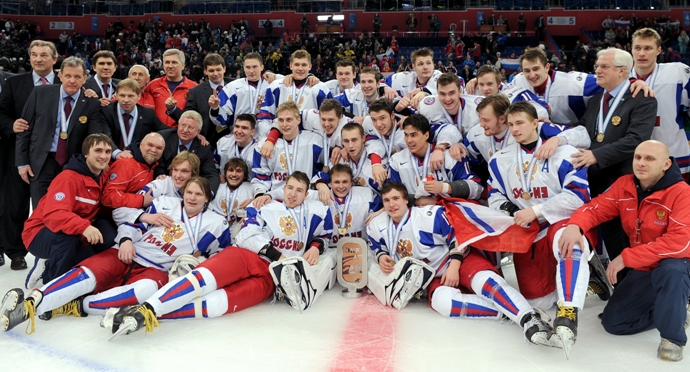