U20 Worlds: Russia scrapes past Swiss into semis

Russia had already met stiff resistance from the Swiss in a 7-5 win in a friendly game as part of the build-up to this World U20 championship, and while Sean Simpson’s men did not create much of a stir in the group stage of this tournament, it was telling that all their three defeats at the hands of serious opposition came via overtime or a shootout. When Alexander Khokhlachyov opened the scoring in the seventh minute, during Russia’s first powerplay, there was no hint of the drama to come, yet the next time the hosts had the man advantage some indecision from Nesterov and Yakupov allowed Swiss captain Christoph Bertschy to make it 1-1.

“We didn‘t expect the Swiss to be so stubborn,” Khokhlachyov admitted. “That’s our own fault – there can be no excuses. We were very tired today, and I think against the Swedes tomorrow we’ll be running on pure emotion from this game with the Swiss.”

The second period was as close as the first. Russia regained the lead through Mikhail Grigorenko but it took all of three-and-a-half minutes for Martin Ness to hit back for the underdogs.

“I don’t think we had any major problems in defense today,” said Grigorenko. “We just picked up a lot of unnecessary penalties.” 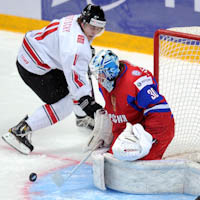 The game took a sharp turn for the worse in the final period as Russia’s youngsters visibly faded, and on the 49-minute mark Sven Andrighetto put the Swiss ahead. A spirited revival looked unlikely as the hosts’ passing game deserted them and only the occasional solo effort posed a threat to the visitors’ goal. Salvation came with 90 seconds of regulation time remaining, thanks to Nikita Kucherov and a large slice of luck. Russia even came close to settling the game during a powerplay in overtime, but this time fortune favored Switzerland and the post thwarted the hosts. The fans need not have worried - Kucherov saved Russia’s blushes with the winning shot in the shootout giving his side a hard-fought 4-3 win.

“When I get them together and tell them what to do, and they all sit there, and understand, and nod their heads, and then go out onto the ice and do something entirely different, what more can I say?” said a frustrated Mikhail Varnakov. “Thank God that character is one of our strengths, because that is why we won today.”

“What are your thoughts on Nail Yakupov’s game?”

“I won’t be too harsh on him. Yes, so far not everything has worked out for him, and I expect him to link up with his partners a lot more and produce less of the solo play.”