U20 Worlds: Russia to face Switzerland in quarters

Russia’s winning run in the World U20 Championship ground to a halt as the hosts lost 1-4 to Canada in this eagerly-awaited New Year’s Eve clash of the tournament favorites. Both teams made a lively start, but the Canadians’ movement and positioning gave them more of a cutting edge, and Andrei Makarov was the busier of the two goalies.

Things were looking ominous, and took a sharp turn for the worse when frustration got the better of Valery Nichushkin and he sent Tyler Wotherspoon crashing into the boards, earning himself a major plus game misconduct penalty. The Maple Leaves were in ruthless mood, and both Hamilton and Scheifele scored during the five-minute powerplay. Nikita Kucherov gave the Red Machine a glimmer of hope going into the break when his beautiful strike halved the deficit.

“We could have done without the five-minute penalty; that really killed us. Our opponents scored twice and had victory in sight. When you go behind against Canada, it’s really tough to come back,” said Andrei Makarov after the game. 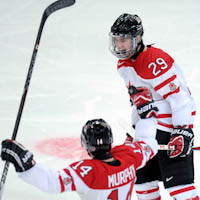 The second period began with a Canadian being handed two minutes on the bench, but Team Russia failed to capitalize and was made to pay. Scarcely had the teams returned to even strength when Ryan Nugent-Hopkins produced a superb pass for Jonathan Drouin (right) to restore the two-goal winning margin.

“It’s not a disaster. We lost fair and square, but we battled to the end and created a few chances,” said Anton Slepyshev, a picture of calm in the mixed zone.

Canada cruised through the final period as a Russian onslaught failed to materialize, and Huberdeau’s empty net goal wrapped things up in the final minute. The hosts must now beat Switzerland on January 2nd in order to meet Group A winners Sweden in the semi-final the following day.

“Steve Spott is a good coach, and unfortunately he’s done his homework,” – was Mikhail Varnakov’s take on the game. “We’ve had a lot of games against the Canadians this past year and he’s obviously worked out how you should play against us.”