Russia’s youngsters gave a far more confident performance in their second game of the World U20 Championship in Ufa than in the first, with a fully-deserved regulation time win over the USA, although there were some ominous echoes of Russia’s uncomfortable opening game against Slovakia: an impressive first period display capped by a goal, followed by a hatful of spurned chances to extend the lead.

By the third minute, Albert Yarullin’s smart strike was too good for John Gibson in the US goal, but the key moment had occurred a short time earlier at the other end when Sergei Makarov produced a brilliant reaction save with his pad to deny the Americans an early lead. After the game, the Russian players confirmed that it was this early episode which sent the confidence flowing through the veins of the entire team. 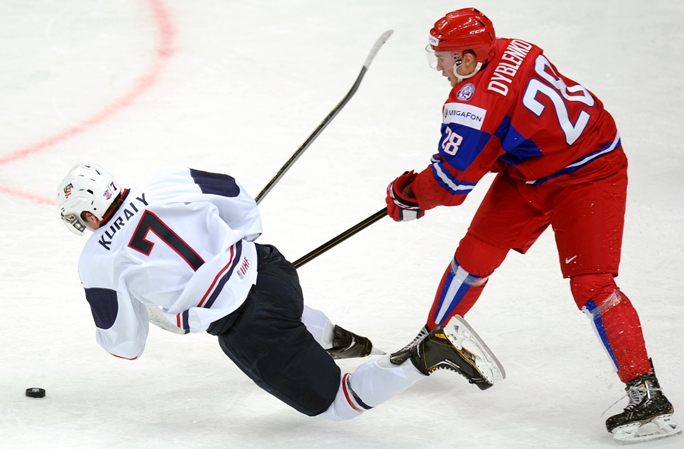 A packed Ufa Arena watched the Americans rally in the second stanza as they poured forward in search of an equalizer, and it duly arrived in the 34th minute. When a loose puck fell to Nikita Kucherov he seemed destined to launch a swashbuckling counter, but he hesitated, lost possession, and Alex Galchenyuk set up Jacob Trouba to thump an unstoppable shot past Makarov.

In the fifth minute of the final period, Valery Nichushkin had obviously decided it was time to settle matters and made an impressive and menacing end-to-end charge toward Gibson’s goal. The puck ran loose in the crease and Vladimir Tkachyov was on hand to grab the game-winner. There was still time for some more déjà vu, with a short-handed Russia once again facing an onslaught in the closing seconds. This time, however, Mikhail Varnakov’s young Red Machine withstood the siege and was rewarded with a second victory of the tournament.