Russia began the 2013 World U20 Championship in Ufa with an overtime victory over Slovakia, although it was a performance head coach Mikhail Varnakov would probably rather forget after seeing his side let a two-goal lead slip away in regulation.

“The Slovaks are the kind of opponents who can really punish you on the counter-attack,” said Varnakov after the game. “But their first goal was one we brought upon ourselves, and I have nothing to say about their second. I don’t have any major complaints about the team, although I wasn’t too happy about the third line.”

The Russians did indeed look comfortable for the first half of the encounter. The weight of expectation from playing in front of a home crowd seemed to have no effect, and they were carrying out their coaches’ instructions with aplomb. Mistakes were few and far between and when they did occur, Andrei Vasilevsky in the Russian goal was always alert to the danger.

Particularly impressive in the opening stages was Nikita Kucherov and it was he who opened the scoring in the fifteenth minute, deftly diverting Mikhail Grigorenko’s pass into the net. The youngster reacted to his goal with the exuberance typical of his age, and even exalted the linesman to join in the celebrations, bringing a smile from the official.

The hosts were noticeably more defensive in the early part of the second period, but nonetheless managed to double their lead just before the halfway mark. Nail Yakupov set up Alexander Khokhlachyov to finish off a smart passing move. Within six minutes, however, a loose puck fell perfectly for Matus Matis and he put the Slovaks back in the game. 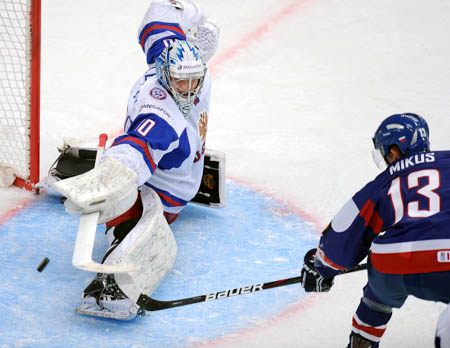 The third period was a mirror image of the first, with Russia on the back foot and Slovakia piling increasing pressure on Vasilevsky’s goal, roared on by a sizeable contingent of Canadian fans who seemed to have snapped up all the best seats at the Ufa Arena.

In the 58th minute, Maxim Shalunov picked up a 2+2 and handed the Slovaks their third power play of the period, and the dam burst with 36 seconds left on the clock. Richard Mraz tied the game with a seemingly innocuous effort that somehow squeezed its way into the net.

Russia now faced the daunting prospect of going into overtime short-handed, but once again the tide was about to turn. Not only did Slovakia let the hosts off the hook, but they generously presented them with a powerplay of their own – an early New Year present which the Russians eagerly accepted. A time-out followed, and a mere five seconds later Albert Yarullin’s vicious slap shot sealed the win.