Alexander Ovechkin inspired Dynamo Moscow to victory at Lokomotiv Yaroslavl, scoring on his NHL colleague Semyon Varlamov in his team’s 3-0 win. Ovi’s goal was the second of the game, coming in the 16th minute to convert a powerplay. And the star man also claimed an assist on the third goal, breaking through Loko’s defenses to set up Richard Gynge, before getting involved in a fight in the closing stages. Alexander Yeryomenko made 32 saves for the shut-out. Niklas Backstrom made his debut in one line with Washington Capitals teammate Ovi.

New coach, old story for Atlant
Atlant Moscow Region may have dismissed head coach Janne Karlsson, but there was no immediate upturn in the team’s fortunes against SKA St. Petersburg. The Mytishchi team went down 3-2 under the guidance of acting head coach Alexander Smirnov, with Ilya Kovalchuk posting 1+1 for SKA. Maxim Mayorov (pictured) scored twice for Atlant, but still ended up on the losing side. Table-topping SKA now has seven successive wins; Atlant suffered a sixth defeat on the spin. 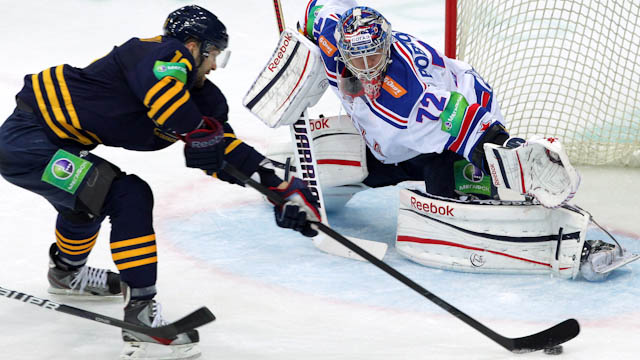 Malkin and Mozyakin conjure win for Magnitka
Evgeny Malkin and Sergei Mozyakin have become one of the KHL’s most feared partnerships this season, and the pair proved more than potent enough to shoot down Dinamo Riga 5-2. The Latvians twice led, but Malkin’s powerplay goal in the 12th minute pegged them back, with an assist from Mozyakin. In the final session the pair combined once more, with Mozyakin scoring twice off Malkin assists to break a 2-2 tie before Nikolai Kulemin added a fifth late on as Malkin took his personal tally to 1+3.

Around the league
Vadim Berdinkov got the winner for Severstal in a 4-3 verdict which ended Yugra’s recent revival. Berdnikov’s 55th-minute goal completed a recovery from 0-2 for the Cherepovets side.

Vityaz Chekhov ended Barys Astana’s three game winning streak with a shoot-out win. The Kazakh side opened up an early 2-0 lead, but was pegged back by Georgy Belousov’s 53rd-minute equalizer before Artemy Panarin settled in the shoot-out. Pictured: Trevor Gillies vs Jon Mirasty fight in the 3rd minute. 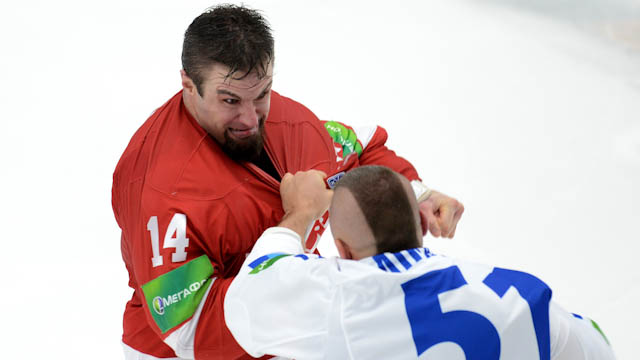 Tim Stapleton was the hero for Dinamo Minsk, grabbing the overtime winner to end Avangard’s five-game winning run. Stapleton also scored in regulation time, while Sergei Kostitsyn drew a blank on his return to his native Belarus.