It was Ovi vs Kovi in Moscow as two of the game’s biggest stars went head-to-head in front of a rare capacity crowd at Luzhniki – but it was Maxim Afinogenov who got the game-winner in SKA’s 3-1 win at Dynamo Moscow. Just as the chance to see Evgeny Malkin saw the ‘house full’ signs posted in Kazan on Saturday, so the opportunity to witness hockey royalty in the flesh delivered the first sell-out in Moscow since Dynamo’s Gagarin Cup battles with Avangard, and grabbed the attention of action-starved NHL fans across the Atlantic.

After all the hype, it didn’t take long for both of the stars to deliver their opening lines. Kovalchuk, making his debut as SKA skipper was the first onto the score-sheet: on a 5v3 powerplay his diagonal found Patrik Thoresen at the right-hand post, and the Norwegian forward rifled his team ahead. Kovalchuk’s first big contribution took just 11:36 to arrive.

Ovechkin had already posted an assist in his Dynamo debut three days earlier, and was close to getting a second early in the game when he played in Mikhail Anisin only for Ilya Ezhov to block at the far post. But now it was time for his first goal. And that came on 14:35, with SKA a man short, as strike partner Konstantin Gorovikov passed inside from the right and Ovechkin scored on Ezhov from in front. 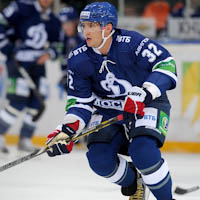 The next goal action, though, did not involve either of the headliners. Instead it was Maxim Afinogenov who stepped up from the supporting cast to fire SKA back in front with a long range effort which deceived Alexei Volkov in the Dynamo goal. And, with the home defense struggling at times, SKA thought it had increased its lead through Evgeny Artyukin, only for the video referee to rule otherwise. And Kovalchuk, put through one-on-one with Volkov on another SKA powerplay, saw the goalie get behind his effort when he seemed odds-on to get his first KHL goal.

Instead it was Viktor Tikhonov who extended SKA’s lead on 48:42 with yet another powerplay goal. This time the Blue-and-Whites struggled to clear their zone and Tikhonov pounced from close range. Ovechkin had a great chance to reduce the arrears in the 57th minute, but brave defense took the sting out of his shot. That left Kovalchuk to enjoy a winning start to life in St. Petersburg, while Dynamo was left counting the cost of too many penalties in a typically hard-fought clash between two of the Western Conference’s strongest rivals.

Donbass recovers for shoot-out success
Donbass Donetsk battled back to force a shoot-out in Mytishchi following a 2-2 tie in regulation time. Two quick goals midway through the second period gave Atlant 2-0 lead thanks to Nikolai Zherdev (27:55) and Alexei Petrov (29:17). But the Ukrainians hit back in the third through Vaclav Nedorost and Oskars Bartulis to force overtime. With no further goals, it went to a shoot-out and Ruslan Fedotenko secured a 3-2 success for Donbass.

Galimov wins it for Lokomotiv
There was another shoot-out in Yaroslavl after Lokomotiv was held 1-1 at home by Dinamo Riga. The Latvians opened the scoring on 29:55 through Anders Dzerins, and held on until Staffan Kronwall finally tied it up on 57:02. Both goaltenders produced saves in the shoot-out, but in the end it was young Emil Galimov who got the decisive goal.

Thornberg’s treble
A hat-trick in 10 minutes for Martin Thornberg set Torpedo Nizhny Novgorod on the way to a comfortable 3-0 victory over Spartak Moscow. The Norwegian forward opened his account on 25:20 and by 35:24 he’d completed a quick-fire to put Torpedo in total command. There was no further scoring, with Vitaly Koval enjoyed a 30-save shut-out, but the third period did produce 58 minutes of penalties as both sides incurred the wrath of the officials.