Bears in the Coliseum

Hockey games in the open air are not so rare these days, as the Winter Classic and similar events regularly capture the public’s imagination and play a significant role in helping to spread the popularity of the sport. But Croatian club Medveščak of Zagreb, to the immense delight of the fans, has just done something special, staging a three-day festival of hockey in a real Roman amphitheater by the Adriatic Sea.

This unique event took place in the Croatian coastal town of Pula, whose famous Coliseum temporarily became an ice hockey stadium, may go some way to puncturing the myth that hockey is only a winter sport and one that will never gain popularity among southern Europeans. This bold idea of Medveščak (“Bears” in English) to play in the historic 2,000-year-old open air arena, with the temperature hovering around the balmy 70F mark, was a stunning success: the fans, despite the relatively low seating capacity (around 8,000) came to Pula from all corners of the continent, while the 900-odd journalists hailed from all over the world - a minor miracle for Croatian hockey. 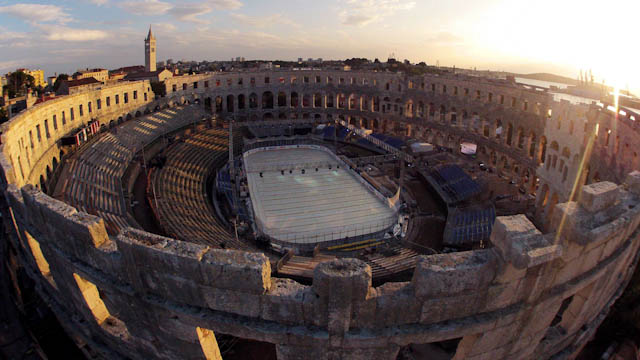 Medveščak is Croatia’s most popular and successful club, but in the dark days of the early 90s during the fall of Yugoslavia the club came close to extinction, and spent most of the following two decades in amateur status. It was not until 2007 that Zagreb’s Bears returned to first class hockey, joining the championship in neighboring Slovenia, and in season 2009-10 the team joined the Erstebank Eishockey Liga, home to 8 Austrian clubs plus one each from the Czech Republic, Slovenia, Hungary and Croatia.

The club’s top brass recently illustrated the scale of their ambition with the announcement of plans to join the Kontinental Hockey League, and last season the team even played an exhibition in Zagreb against newly-crowned Gagarin Cup winners Dynamo Moscow. The success of these games in Pula makes Medveščak’s dream of becoming a KHL club seem all the more feasible. 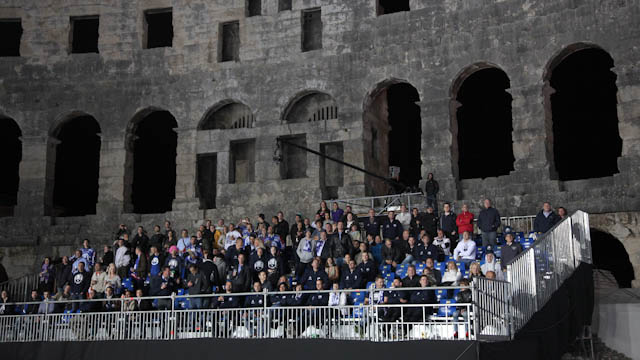 Medveščak owner Damir Gojanović, commenting on the plans, says the club has all the necessary infrastructure to meet the League’s demands, and there is enough interest from potential sponsors to ensure the budget matches those of Slovan and Donbass, who both joined the KHL this season. One area which does still need serious attention, however, is a strengthening of the roster – Medveščak needs to entice at least two lines of KHL-class players, and must also keep hold of the quality personnel already plying their trade at the club.

In all, Medveščak played three games during this historic event in the Pula Coliseum, and two of them were against fellow members of the Erstebank Liga: first, and much to the dismay of the Bears’ adoring fans, came a 2-3 loss to Slovenian side Olimpija Ljubljana, but on the final day Medveščak made amends with a 4-1 win over Austria’s Vienna Capitals.

In between these games, a crowd of over 5,000 turned up to watch a Medveščak veterans’ side, reinforced with several current players, take on the Russian veterans’ team HC Gazprom Export, in a game which finished in a 10-3 triumph for the visitors. The Russians’ five goals were struck by KHL Players’ Union chief Andrei Kovalenko, with KHL Disciplinary Committee head Valery Kamensky and Dmitry Teplyakov each celebrating a double. KHL President Alexander Medvedev also scored for the visitors, and later in an interview with the international media said that he rated the chances of Medveščak achieving entry to the KHL for the 2013-14 season at 95%. 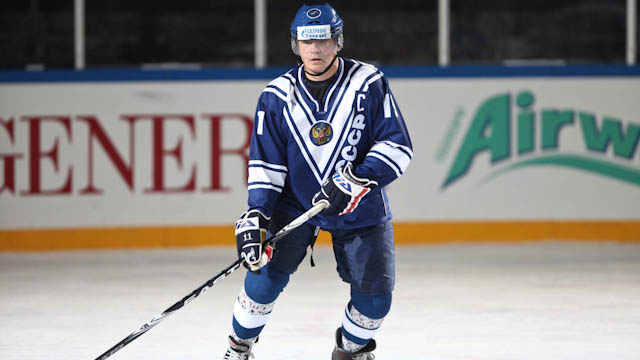