On Saturday, after starting the season on the road, Donbass finally staged its first game in Donetsk and Ukraine had its first taste of the KHL. In this traditionally soccer-loving region, the premiere of top-class hockey was judged a success: the small but comfortable Arena Druzhba was more than three quarters full, and the 3,500+ fans who attended created an electric atmosphere for the game against Sibir.

The club, like the city and indeed the entire nation, is yet to get acclimatized to the dizzy heights of hockey at this level. The same, however, could be said of the other debut clubs and of course the League as a whole, since the KHL itself is still a young and developing project, so for KHL Commerce and Communications Vice-President Ilya Kochevrin this is a time of mixed emotions.

On one hand, Kochevrin is delighted at the rapid progress made in the League’s expansion, bringing the primary goal of becoming a truly pan-European competition ever nearer. On the other hand, this progress is accompanied by new pressures and demands.

“The responsibility is always growing,” says Kochevrin. “First and foremost there are the responsibilities of the new clubs joining the KHL this season. Of course, this differs from club to club. Donbass, for example, should not worry too much about results. In the end, no-one has lofty expectations that the Ukrainian team will be an instant success on the ice, since hockey in that country has not yet reached a level where they could expect to be a major force. So the main mission facing the Donetsk club is to get the local public hooked on the game and show that Ukraine can successfully progress in other sports as well as football.

“With Lev Praha it is a different story, since the club is representing the Czech Republic with all its illustrious hockey history, and that is a different level of responsibility altogether. But Lev is a new club, and faces the task of capturing and keeping a band of loyal supporters. To achieve this, Lev must not only work hard to spread the word among the population, but also achieve some decent results on the ice. This will take time, but there is genuine reason for optimism. For instance, the first game of the season in Prague was attended by fans of Sparta, the club which shares the Tipsport Arena with Lev, and they brought with them banners in support of Dinamo Riga, Lev’s opponents. This, of course, enlivened the atmosphere considerably. But already after only a handful of games the mood among the fans has begun to change: those that only recently cheered the opponents of “Lev, the Prague team” are now openly talking about “Lev, the Czech team,” – in other words, they are realizing that in the KHL Lev represents all of the Czech Republic, and this is sure to guarantee tremendous support for the team.

“The circumstances differ once again with Slovan. The Bratislava team already has a long and glorious history, and has a large and fanatical following that will fill the Slovnaft-Arena to the rafters. So Slovan will feel a huge responsibility to battle and compete in front of those loyal supporters. And in the KHL, it will be much harder to give those fans the success they crave than it was in the Slovakian championship.

“So, we have three new teams and each one has its own unique situation and its own specific burden of responsibility. The one factor uniting the three is that they all have a lot to learn.” 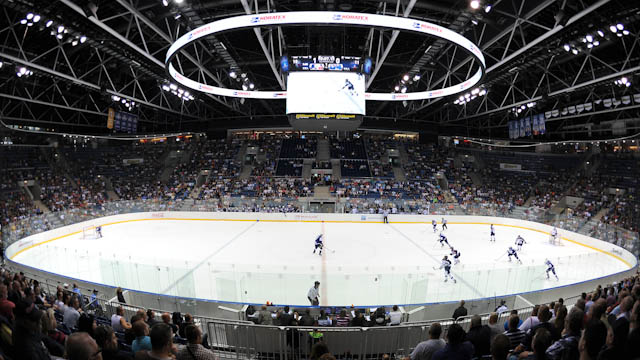 Mr. Kochevrin is right, of course, but we could add that the League itself could learn from some of the new boys. Certainly both Prague and Bratislava could teach many Russian cities a thing or two about the organization and staging of games. For example, the ultra-modern Slovnaft-Arena (above), built for the 2011 World Championships, would have no trouble hosting at short notice a major, prestigious event such as an All-Star Game, if the need arose.

“Yes, that’s true,” Kochevrin admits, “and we are examining just such a possibility. It won’t be for a while, merely because up to now we have staged every All-Star Game in the West, and now we want give the East its fair share. This season’s event will be in Chelyabinsk, and for 2014 we will choose another eastern city from a number of worthy candidates, but sooner or later the All-Star Game will return to the west, and then of course Bratislava will be regarded as one of the strongest candidates.

“In any case, what is important is that the development of the League is a two-way process, and the winners are not just the new teams, by getting the chance to move up to a higher level, but also the KHL will gain a lot thanks to the arrival of its new members. And it is precisely this fact - that everyone benefits from such progress – which means we can really believe in the long-term success of our League.”