Avangard looks to the future

Avangard Omsk new head coach Petri Matikainen (left) reflected on his first game in the KHL and said he saw positive signs despite his team’s shoot-out defeat in Moscow.

But Matikainen was happy enough to take a point from the opening fixture. “The season opener is always hard for both teams but I think we prepared well and played really well in the first period,” the Finn said. “In the third period it was a very tight, tough game for both teams and again Dynamo’s powerplay worked very well but I’m happy that we came back from the 2-1 goal and got a point.”

While some of Avangard’s players had spoken of Tuesday’s game as Game 8 of last season’s final, Matikainen insisted that he only wanted to look to the future.

“It was the first game for me. I’m a new man at the head of the team and the past is the past,” he added. “I can only worry about my team, coaching it right now, day by day. We were here to win this game and we were pretty close. Of course there was some emotion from last year but for me and for our team we want to look ahead.” 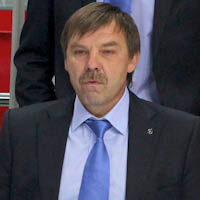 Part of that future involves Evgeny Mozer, a 19-year-old forward who made his KHL debut. The coach was happy with what he saw from a youngster who impressed at last year’s World under-20 Championship.

“It was his first game at this level and he played quite well,” Matikainen added. “If he works hard in the future he’s going to be a damn good hockey player. He needs more experience but he has a good hockey head.”

“We had three penalties [in the first period], two right at the start, but in the second period we began to pick up,” he said. “In the end we won, but it was a long battle, right the way to the shoot-out.”