The puck is about to be dropped, and the 2012 Lokomotiv Cup is set to be a star-studded curtain raiser to the fifth KHL season.

And the organizers promise that the opening ceremony will also involve a galaxy of great names from hockey history, including old Summit Series heroes Phil Esposito and Wayne Gretsky. Former Dynamo hero Alexander Maltsev is another of the Soviet-era stars expected to take to the ice prior to the big face-off at 7:30pm Moscow time.

But aside from the festivities, the encounter also promises to offer the first clues about the upcoming season –and last year’s finalists have had contrasting summers. 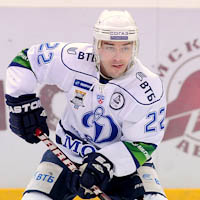 For Dynamo, there has been little change. Head coach Oleg Znarok has remained behind the bench and the nucleus of last season’s roster remains intact. Perhaps the most striking departure was Leo Komarov, off to Toronto unless the NHL fails to avoid the threat of a lock-out. Meanwhile, the major summer signing was a player already familiar to Blue-and-Whites – Mikhail Anisin (left). The young forward was the play-off top scorer last season, but his permanent transfer from Vityaz Chekhov turned into a drawn-out summer saga, spiced with allegations of clashes of personality and arguments over money. With that deal now done, Dynamo will hope and expect Anisin to pick up where he left off in April and try to force his way into the Russian national squad.

The other prominent summer arrival saw defenseman Roman Derlyuk resume his acquaintance with Znarok, a partnership which dates back to MVD’s run to the 2010 Gagarin Cup final. As for replacing Komarov, whose ebullient presence was a driving force behind the team, Znarok has said he’s hopeful that the unpredictable talents of Denis Tolpeko might fulfill that role. 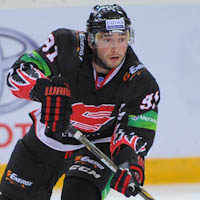 At Avangard, things are a bit different. Petri Matikainen has taken over as head coach and was immediately faced with the challenge of replacing top scorer Roman Cervenka. The vacancy for a foreigner on the roster is taken by Slovak striker Tomas Zaborsky, Andrei Taratukhin arrives from Salavat Yulaev to bolster the strike force, while Alexander Perezhogin has been identified as a key part of the offense for the coming campaign. And if Perezhogin, who scored three game-winning goals in the first four Gagarin Cup final games, isn’t enough of a threat on his own, the striker is joined by his younger brother Viktor, recruited from MHL side Amur Tigers.

Marikainen has also spoken highly of the youth team he has inherited. Omsk Hawks won the MHL last season, and added the Opening Cup on Saturday with a narrow win over Red Army. While youngsters like Nikita Pivtsakin (right) were already establishing themselves last time out, the Finnish coach has picked out Evgeny Mozer as a talent to watch in the coming months.

It’s not Dynamo’s first appearance in a season curtain-raiser: two years ago Znarok took the club to Ak Bars Kazan and returned with the trophy after a 3-1 win. That came about after the close-season merger between Dynamo and Znarok’s beaten Gagarin Cup finalists HC MVD; this time the uncompromising coach gets to take a bow as defending champion.