For the second successive day, all eyes were on Yaroslavl as the city’s Arena-2000 hosted the second encounter of the U20 Super Series between Russia and Canada. In Game 1, the Canadians survived a late Russian onslaught to claim a 3-2 victory.

The teams had less than a day to digest the outcome of the first game, recharge their batteries and prepare for Game 2. Despite the defeat, Russia head coach Mikhail Varnakov made just one change, bringing in Andrei Makarov to replace Andrei Vasilevsky in goal, as he had promised at the press conference the night before. In contrast, Canadian coach Steve Spott replaced five of his skaters in addition to his goaltender.

The early stages resembled a reply of Game 1, with the more active Canadians dominating an initially sluggish Russian team, but the visitors failed to turn their superiority into goals – mainly due to some outstanding goalkeeping from Andrei Makarov. The major incident of the first period came in the 16th minute, when Mark Scheifele’s illegal challenge on Lokomotiv’s Kirill Kapustin left the Russian with an injured knee and earned a game misconduct for the Canadian center. Thankfully, Kapustin recovered in time to return for the second period and took sweet revenge by hitting a hat-trick in his home stadium.

“I’m grateful to our medics for getting me back on my feet,” said Kirill. “The referee gave the Canadian player the correct punishment, because I was no longer involved in the play and I wasn’t even moving, but he just hit me in the knee.”

There was further punishment inflicted on the visitors just 38 seconds into the second period, when first-line attacker Anton Zlobin found himself one-on-one with the keeper and scored with aplomb. 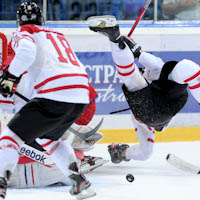 Three minutes later, Kapustin scored his first and Russia’s second, and after Ty Rattie’s reply gave the Canadians a few minutes of optimism, the Yaroslavl forward doubled his tally to give Russia a 3-1 lead going into the final period.

“I had a talk with the guys today,” said Mikhail Varnakov after the game. “I pointed out where they’d made mistakes, and today we started moving a lot better, the tension evaporated, and as a result we performed a lot better. Now we’ll set off for Halifax in the right mood.”

In the third period, a double from Maxim Shalunov and Kapustin’s hat-trick goal gave the Russians a resounding 6-3 victory, which should be more than enough to wipe away the memory of their narrow defeat the day before.

The last word went to victorious Russian captain Nail Yakupov: “I’d like to thank the fans. They cheered us on, and created a great atmosphere. It’s a pleasure to play in Yaroslavl; the encouragement we got from the fans was terrific. We dedicate this victory to the guys who perished last year. As for the upcoming games in Canada, I don’t think it will be tougher for us playing on a Canadian rink. Yes, on their own ice the Canadians’ movement will be even faster, they’ll hit us even harder, but we’ll just have to play more intelligently, make sure we do everything the coach tells us, and everything will be fine.”