Yaroslavl was the venue as the Russian and Canadian under-20 teams played the first game of the Canada - Russia Challenge, a series of four encounters to commemorate the 40th anniversary of the legendary 1972 Summit Series. Yaroslavl also hosts Game 2, today, after which the event moves to Canada for two more games in Halifax, on August 13 and 14.

Legacy
The last time we saw a series of this kind - albeit one of eight clashes - was back in 2007, and that contest turned out to be so one-sided that the best result Russia managed was a tie in one game. Any thoughts of the failure of five years ago, however, were far from the minds of the new generation representing today’s Russia.

“When you go out to play against Canada you do not need to look for motivation, it is already at a maximum,” said forward Daniil Romantsev after the game. Indeed, Romantsev and all the other hungry young players who went out onto the ice at the Arena-2000 had something to prove: each one battling for his place in the roster and desperate to prove to themselves, their coaches and their managers that they are good enough to play hockey at the highest level.

Lest we forget
On the eve of the game the teams laid wreaths in honor of all those players, coaches and staff of Lokomotiv who perished in the tragic air crash of the 7th of September 2011. After the deeply moving ceremony, Hockey Canada President Bob Nicholson said: “The trip to Yaroslavl is a special occasion for us. What happened here a year ago was a great tragedy for us, as it was for you. Brad McCrimmon’s father, Brian, has flown here with us and he has been made very welcome. We are touched.”

Malcom Subban, goaltender for the Canadians, added: “As for my feelings on visiting the graves – I’m simply lost for words. Those huge memorials are very striking. All credit to you for remembering those who died.”

Ready for battle
“Today and tomorrow we’ll see the best young players in Russia and Canada - the future of our game. In spite of the friendly nature of the series, the games themselves will be very competitive,” promised Vyacheslav Tretyak at the press conference. “For these guys, everything depends on today. This occasion is like a world championship final for them.”

“We know Russia is the number one team in the world at the moment. The Russians have won so many trophies and medals, they just became world champions again in Helsinki, and they have beaten us twice in a row in this age group. For us, this is a great chance to get some revenge,” said Bob Nicholson.

Game on
Despite an abundance of strong hits, neither team managed to create a clear scoring chance in the first period. The visitors enjoyed the livelier start, shooting on sight from medium range, while the hosts played a more cautious game, keeping possession and waiting for an opening, but the Canadians refused to let them settle and find their rhythm.

“It is unlikely to be a very friendly encounter, and we may see some fighting,” Boris Mikhailov had predicted, echoing Tretyak’s promise, and both Soviet hockey legends were right. For the entire game, any chance of inflicting a crunching hit was gratefully accepted, and the gloves came off a number of times. The first scuffle came in the 19th minute, during which Alexei Vasilevsky waded in to defend his brother and unceremoniously dumped Ty Rattie onto the ice. 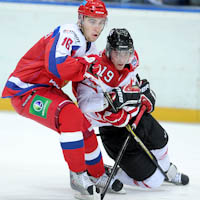 Denouement
If the Russians were too cautious in the opening period, they were far too sloppy at the start of the second. First Sean Monahan opened the scoring on a powerplay, and within two minutes a wrist shot from the blue line by Scott Harrington doubled the Canadians’ advantage. The visitors soon went close to extending the lead even further, but Vasilevsky was alert to the threat and made the save.

The double strike stung Mikhail Varnakov’s team into action and on the 30-minute mark Anton Slepyshev, a constant threat around the Canadian goal, managed to halve the deficit. Maxim Shalunov and then Nikolai Prokhorkin had decent chances to pull Russia level, but both were denied by some superb goalkeeping from Subban. Then, just over two minutes before the second hooter, another powerplay allowed Dougie Hamilton to restore Canada’s two-goal winning margin.

The third period was a treat for fans of good, end-to-end attacking hockey, thanks to the Russians having nothing to lose and the Canadians having no intention of sitting back to defend their lead. With seven minutes of the match remaining, the Russian youngsters were handed a 5-on-3 and Nail Yakupov, first overall pick in the 2012 NHL draft, gave the home fans hope when his powerful shot fizzed into the net. Russia kept battling away and pulled the goaltender in a frenetic final minute, but the visitors held on to claim a morale-boosting victory.

Impressions
“We picked up a lot of penalties and we wasted several good chances,” was Anton Slepyshev’s summary. “We’ll study the video and do some more work.”

“The Russians played very well in offense, but we came back at them even better,” – said goalkeeping hero Malcom Subban. “The second and third periods were a lot livelier, and we got a colossal boost from this game.”