Lokomotiv Yaroslavl made its long-awaited return to top-level hockey action in Moscow on Wednesday, taking on CSKA in a pre-season challenge game.

It was planned as a low-key affair, with little pre-publicity to lure sports fans away from the Olympic coverage on a sweltering evening, there was still an impressive crowd to welcome head coach Tom Rowe’s new-look roster to “The Loko Family”.

More than 100 Loko fans gathered outside the arena after the game to greet their new heroes prior to the team’s training camp in Switzerland, and spirits were hardly dampened by CSKA’s 4-1 win in a gentle pre-season warm-up.

Indeed, with Rowe choosing to give ice time to several youngsters on the roster – including many who were with the club during last season’s VHL and MHL campaigns – there were promising signs for a bright future during a first period where the Yaroslavl side more than held its own against big-spending CSKA’s powerful line-up. 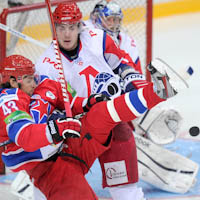 If high-profile forward Alexander Radulov was perhaps expected to dominate proceedings on the ice, he found himself upstaged by a bright attacking show from Loko’s fourth line, with Sergei Plotnikov, Vladislav Karatayev and Oleg Yashin combining well in the early stages. Plotnikov smashed a wrist shot against Rostislav Stana’s left-hand post in the third minute, and it was the same line which saw Yashin open the scoring on 9:29, touching home from close range after a flowing move cut a swath through the CSKA defense.

The way a youthful Loko contested the first period backed up Rowe’s claim that he found “14 or 15 youngsters who can play” when he came to the organization in the summer – and his willingness to give them game time highlights the importance that the club places on maintaining some continuity with the players who brought hockey back to the city in the aftermath of last September’s tragedy.

But with several more experienced players, including Mikelis Redlihs, Vitaly Vishnevsky, Roman Lyuduchin and Alexei Kalyuzhny rested for the evening, CSKA’s greater experience proved decisive – and Radulov marked the occasion with his first goal in Red-and-Blue, coolly converting a penalty shot on 33:32 after he was impeded by Yegor Martynov.