Face to face with Milos Riha 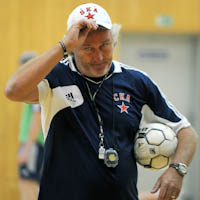 It is becoming a tradition for SKA players to spend the first training tour of their preseason preparations in the Czech Republic, and this year the destination is Havlickuv Brod, a small town about 75 miles from Prague. But the men from Saint Petersburg are here on business, not pleasure, and have been putting in four training sessions every day. Only at the weekend did the coaching staff lighten the workload: on Saturday the team had one session out on the ice, and on Sunday the activity was limited to an hour’s indoor fitness training followed by a light cross-country run along the shores of a picturesque lake not far from the arena. With the weekend’s coaching done, SKA head coach Milos Riha was free to give an interview to the KHL press service.

“What factors do you have in mind when choosing a destination for your preseason tours?”
“Of course we try to make sure everything the team needs is there: a good hotel, good food, and a decent arena where we can do various kinds of exercise and practice. We like it in Havlickuv Brod. It is a peaceful little town with all the facilities we need for training.”

“Your assistant, Andrey Potaychuk, in a recent interview described SKA’s training sessions as grueling. Do you agree?”
“I don’t think our training methods differ that much from last year’s. We want the guys to put in a large volume of work to get a good level of physical fitness. Yes, we have brought in some new exercises which in the long term will help the guys prepare better for a game.”

“Do you have any players that are struggling to keep up with the training?”
“We have none of those. All our guys returned from vacation in good shape, since they knew that we would set them a heavy workload from the very first day back in training. We’re training four times a day, and so far I have seen no sign of any problems with the players.” 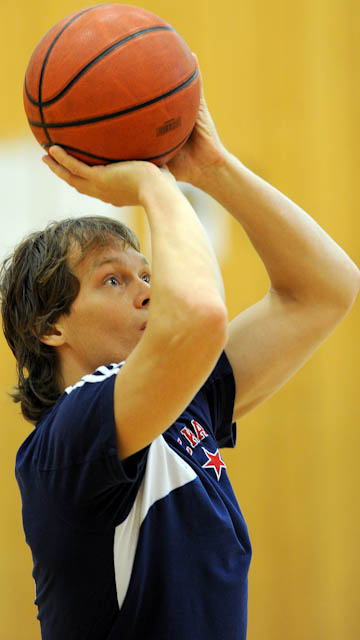 “Every summer SKA has surprised and delighted the fans with a big signing. Why has the club been so modest in the transfer market this year?”
“I’m not really the one to answer that question. Sure, we had a shopping list of players we’d like to have, but for various reasons we could not make an offer for all of them. But we are still trying to sign one well-known player, a famous player.”

“In the spring Vladimir Tarasenko decided to leave for America. Do you approve of his choice?”
“It was his decision and his choice. In my view, he was a little hasty. I believe he could have stayed another couple of years in the KHL and matured as a player, but he decided otherwise. I can only wish him luck.”

“Are you counting on the return of Viktor Tikhonov?”
“To be honest, for the coming season I wanted to build our game around Tarasenko and Tikhonov. I would have liked to play them in the second or third line and give them a lot of ice time. But I don’t know if Tikhonov is coming back; he’s still thinking about where he wants to continue his career.”

“You let Kirill Koltsov leave and you brought in Kevin Dallman. Is it a good exchange, in your view?”
“I think we did everything right. Yes, Kirill notched up a lot of points, but there were parts of his defensive play we weren’t happy with. Last season all our defenders were left-handers, and now we have Dallman and Chudinov – both right-handed, and that’s a big plus for the team.”

“Are you happy that there are no new goaltenders? There are rumors about SKA being interested in Pavelec…”
“We have faith in Stepanek and Ezhov. They are young, so we’re counting on them making progress and performing well.”

“Last year Maxim Afinogenov’s (left) performances drew quite a lot of criticism. Do you think he will find his peak form in the new season?”
“Last year Maxim was injured and took a while to recover, so there was no way he could have played to his best. He put in a lot of work during his vacation, returned in superb condition and now in training he’s one of the best. I’m sure all that work won’t be wasted and he’ll play some great hockey.”

“You already have your full quota of five foreign players. Are you happy with them?”
“So far we have no plans to change anything, but over the course of the season anything is possible. I won’t rule out finding someone who is better than those we have.”

“You have two exhibition matches coming up. What do you expect from these games, and what kind of hockey do you want to see from your team?”
“You understand that the result won’t matter to us. These matches are part of our training process. We’ll definitely use two lines of youngsters, to give these players a chance to prove themselves. Games like these help us to determine which of our young players should stay with the first team.”

SKA will play twice this week: on the 24th of July the Petersburg men face KHL new boys Slovan Bratislava in the Slovak capital, and then return to the Czech Republic for a game on the 26th in Brno against local side HC Kometa.