After its huge success as one of the main venues of the Euro 2012 football tournament, Donetsk is now eagerly looking forward to another sporting premier, as from September the best hockey players in the Old World will be heading for the city. And while the football was certainly an illustrious occasion, it was also a fleeting one, whereas one can confidently say that Donetsk’s entry into the Kontinental Hockey League is a permanent move to a higher sporting plane.

The KHL has been waiting just as eagerly for the arrival of Donbass. Since gaining entry a year ago to Russia’s lower league, the VHL, the club has distinguished itself with its comfortable arena, the quality of game broadcasts, its solid squad of players, the professional running of the club and most of all with the thoroughness with which the people of this city have tackled all the obstacles on the way to hockey’s promised land. Publicly, however, the owners of Donbass had been understandably guarded about their desire to play in the KHL, bearing in mind that the team’s home, the Druzhba Arena, is still too small to meet KHL criteria.

But in the spring, probably the biggest decision in the club’s 11-year history was made: Donbass sent the necessary forms to KHL HQ in the Russian capital, and on June 7th the club website proudly displayed the official reply confirming that Donetsk would have a team competing in the Kontinental Hockey League 2012-13 season. Thus began an exciting new chapter in the history of Donbass Hockey Club.

Preparations for the arrival of KHL hockey are on the same grand scale as those made for the elite of European football. The Druzhba Arena, built in 1975, is now going through its third major reconstruction to make it even more comfortable for fans to watch hockey in the 4,000 capacity venue. And the improvements are not just for the ordinary supporters. There are new boxes for VIPs, a new press box with enough seats and all the necessary equipment to cope with around 50 media personnel, and the TV pictures from Donetsk are good enough to satisfy the most demanding devotee of HD viewing.

In spite of the extensive renovations the capacity has remained the same, but in two or three years’ time Donbass should be hosting a grand housewarming party: a project for a new 18,000-seater arena is due to receive final approval, and the day is not far off when construction will begin. Until then, for those fans that plan to come to Donetsk it may be worth their while to plan well in advance.

No-one at the club has the slightest doubt that full houses are practically guaranteed. For confirmation one needs only to glance at the messages appearing on various hockey forums announcing plans to visit Donetsk, even by fans in the Russian city of Rostov, who thanks to their geographical proximity to the industrial capital of Ukraine are now only a tank of gasoline away from the chance to watch hockey of the highest level.

“At the start of last season fans were leaving up to ten or so comments on the Internet after games,” recalls Donbass captain Sergei Varlamov. “But by the end of the season that number had grown to over a thousand. The fans in Donetsk are gaining an understanding of the game; in fact, I can say with some confidence that many people in the city are already beginning to live and breathe hockey.” 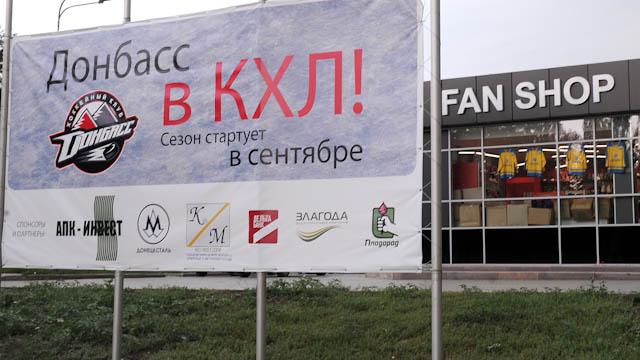 Donbass will begin its debut KHL season with a new coaching staff. Coming in to replace Anatoly Kulikov is Julius Supler, famous not just as an eminent hockey specialist, but also for his amazing cooking and even some horse-riding skills. Since his departure from CSKA in February the 61-year-old Slovak has been far from idle and has grabbed with real enthusiasm his mission to lead the KHL’s first Ukrainian team step by step up the tournament standings.

For this task, Supler will have plenty at his disposal. Personally overseeing hockey in Donetsk is successful businessman and Ukraine’s deputy prime minister, Boris Kolesnikov, so the club will not be short of finances. Over the last couple of months the management has made some shrewd selections: Ersberg and Laco to guard the net, Pilar and Obsut in defense, plus Dadonov and Nedorost in offense. Add to this a number of highly-rated Scandinavians, and while they will be making their debuts in the KHL, the performances of the Finnish and Swedish national teams speak for themselves.

A total of 39 players accompanied Supler on the first training trip to Finland, giving the new boss a chance to judge all his new players with his own eyes. “Right now I want to see each one at work out on the ice,” says Supler. “Toward the end of the preseason training it will become clear who will make the starting line-up, and then we can make plans about whom to bring in to strengthen the team. We want to see another attacker and another defenseman, and we have specific candidates in mind.”

With the journalists Julius was, as usual, welcoming and open. He spoke of the people he had encountered in Donetsk and their hopes of building a powerful hockey club, and how comfortable he felt in the city. Before leaving for the trip to Finland he managed to find two hours in his busy schedule to accompany a crew from KHL-TV in a walk around the town, during which he chatted freely and found real Ukrainian groceries to buy at the central market. His previous two teams in the KHL, Dinamo Riga and CSKA, always made it to the play-offs with him in charge. And now here in Donetsk, everyone – from the fans right up to the club bosses – believe that success is not about to desert the good-natured specialist from Slovakia.